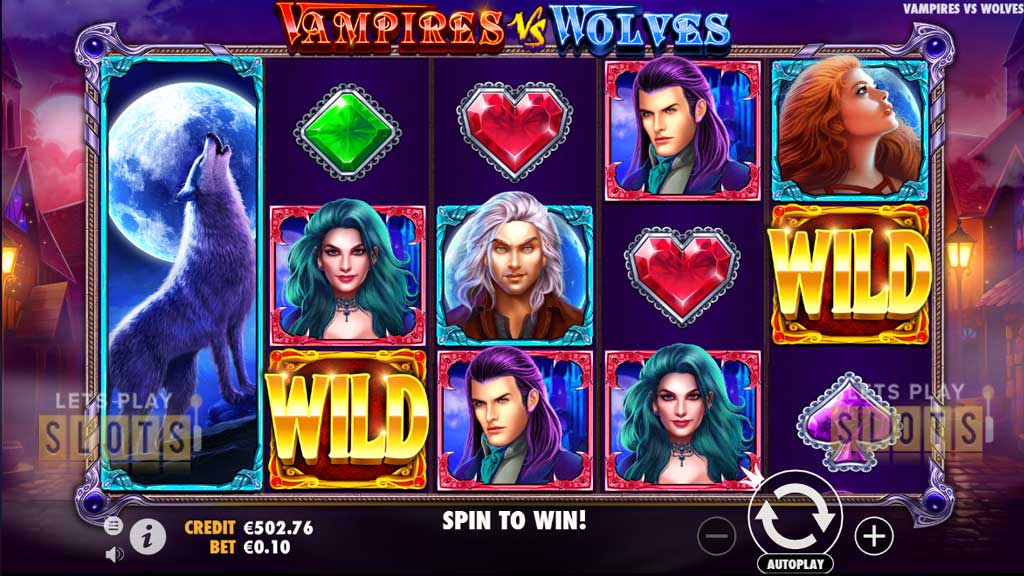 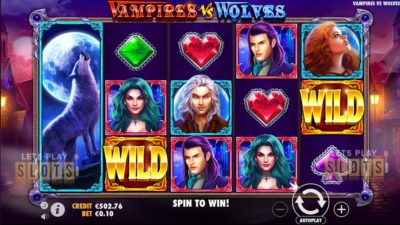 Horror movie directors over the years have used both vampires and werewolves in a lot of their movies as they know they have a global audience that is fascinated by the bestial power of the werewolves and the sensual seductiveness of vampires.

Pragmatic Play is bringing both of these creatures together though for their latest offering called “Vampires vs. Wolves“. Players will be taken into the center of an epic battle between these two monstrous creatures.

Vampires vs. Wolves is yet another Pragmatic Play title that is easy on the eye. The background for this game is a lonely street that it lit up just enough to get your blood pumping as you confront the unknown.

The creepy soundtrack adds a lot to the ambiance of the game. Players need to score wining combinations on one or more of the games ten paylines.

The low-value symbols are the diamond, club, heart and spade gemstones. The more valuable symbols are the various characters on the reels. The most valuable one is the vampire with the white hair. Players who score five of him in a combination get 80 times their stake. Besides that, there is also a wild symbol that replaces everything except the scatter symbols. Players who get five wilds on a payline will win 100 times their stake.

The game has two special features that are triggered by different scatters. The howling wolf and the castle are the scatter symbols and players who score a set of them will have a choice between Wolf Free Spins and Vampire Free Spins.

For Wolf Free Spins feature, players get 14 free spins. During these free spins, three of the character symbols become werewolves. They will act as wilds so that players will have an increased chance of getting a win. Vampire Free Spins offers less free spins. Players will only get eight free spins but three of the character symbols will become vampires. They will act as sticky wilds, which means that they will lock into place and act as wilds for the duration of the free spins.

Players will have to decide on whether they want the bigger jackpots that are being offered by the Wolf Free Spins or the sure wins of the Vampire Free Spins.

Pragmatic Play’s presentation in this slot is pretty impressive. Plus, the decision on what free spins feature to use changes the game so that players have more control over their fate. Do check it out when it arrives at your favourite online casino.

Hurray! There is a competition going between users of our site!
You have to do nothing, but browse out site, and win a daily prize. Click here to read more.
You current ranking:
Time Left: 2h 2m 44s