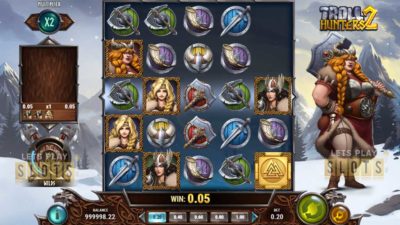 The popular Troll Hunters slot game took players to the mountains of the Viking North to hunt some of the most dangerous monsters out there. Play’n GO have decided to launch a sequel and take players back on a new hunt with their new “Troll Hunters 2” slot game. It brings back all of the fun of the original game and adds some additional twists for those that are familiar with Troll Hunters.

Players start off by being taken to the snow covered mountains found in the original game and are greeted by an epic soundtrack. The game is played on a 5 by five grid. The great thing about Troll Hunters is that its paylines are different. You only need to make a combination of at least three symbols which you can do horizontally or vertically.

As for the symbols, players can make combinations from Norse-themed symbols. There are the low-value ones like horns, helmets, swords, aces and tomahawks. The most valuable sets are of the three female Vikings: Ylva, Borghild and Astrid. Each of these reward players ten times their stake if they get a set of five.

The great thing about the game is any win can often result in more wins. Players receive a wild Odin symbol when they win as well as having all the past symbols disappear. The wild stays in the middle position of the combination. This means that players get another chance at winning as new symbols drop down. Plus, every win gives players a win multiplier up to 3x.

The game also has a great set of added bonuses. For example, there is the Multiplier Wilds feature. When players win combinations with Troll Hunter symbols only, they charge up a meter at the side of the game’s grid. At certain milestones, players are rewarded a multiplier wild depending on the Viking symbol that triggered it.

Plus, during these Free Spins, players are filling up a meter for the Win Spin feature. When it is full, a 2×2 troll multiplier wild is added to the reels for the free spins. This is a big chance for players to win. Players can also clear out the entire grid to get an instant cash prize of 500 times their stake.

Players should give Troll Hunters 2 a spin or two when it comes to their favourite online casino or looking for another Viking Game? Why not try Viking Glory from Pariplay

Hurray! There is a competition going between users of our site!
You have to do nothing, but browse out site, and win a daily prize. Click here to read more.
You current ranking:
Time Left: 4h 46m 0s