Netent Lets You Fight Crime In Style With New Hotline 2 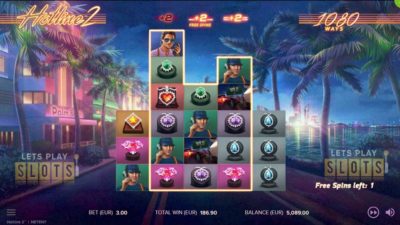 The original “Hotline” slot game brought the sights and sounds of Miami from the 1980s to life and followed detectives Quinn and Riviera. Now the stylish detectives are back in a sequel titled “Hotline 2“. NetEnt brings back the popular duo back to Miami to solve a jewelry theft and they are as cool as ever.

Players who start up this game will be pleased to note that the graphics are still as great as ever. They are taken to the streets of Miami, with the sea on the side and some fancy homes to see.

The sun is setting on Miami and it makes the city glow. The music also helps the mood by being a complete throwback to the 80s.

The grid for the game is the usual five reels and three rows. What is different is that the game offers 243 ways to win. Players who played the original should be familiar with the symbols used in the game. There are six low-value icons, while four characters act as the premium symbols. This includes Detectives Quinn and Riviera, then the Mic Drop Guy and Kitty Weiss. Kitty is the game’s most valuable symbol.

The game has a decent betting range. Players can wager from €0.30 to €150 per spin. The maximum potential of each spin is a massive 5,184x the stake so it definitely worth a few spins. The Netent game’s RTP is also pretty high at 96.05 percent.

Players will also have fun with the special features of the game. Hotline 2 has a pair of special symbols. There is the Flamingo Scatter and the Wilds. The Wilds are simple to explain since they act as all the other basic symbols. They can make winning much easier. The great thing about them is that when they land in the three middle reels, they expand to take over the reels. Additionally, the game can randomly change from day to night in the background. This randomly changes one reel into entirely wilds.

Players will also want to score the scatters. Those who score three scatters will get seven free spins. During these free spins, when a wild shows up, another row of symbols is added. Lucky players can keep on scoring the wilds to get a maximum of six rows. This increases the ways to win to 1,944. Players even get two more free spins once one of the three middle rows reaches a height of six.

Overall, this is a fun game to play. Do check it out when it comes to your favorite online casino.

Hurray! There is a competition going between users of our site!
You have to do nothing, but browse out site, and win a daily prize. Click here to read more.
You current ranking:
Time Left: 20h 21m 11s