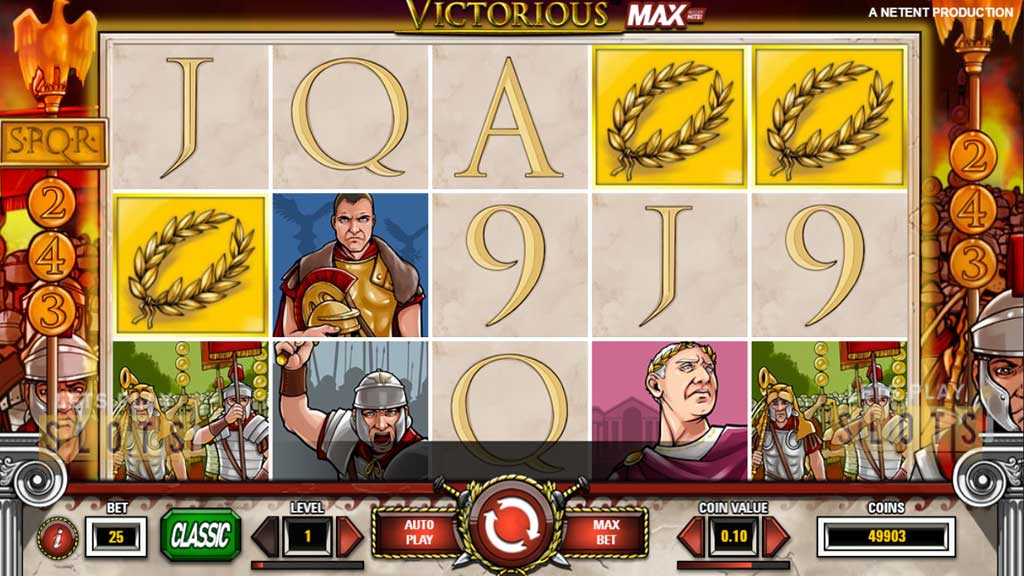 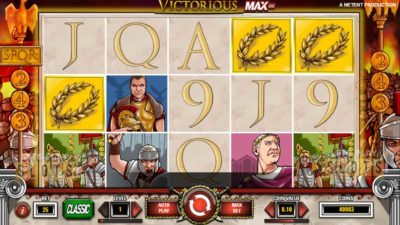 The original Victorious slot was a big hit for NetEnt.

The original slot which was released back in 2012 allowed players take on a lead role in the Roman army and gave them a great chance to win an awesome jackpot. The high volatility and the great graphics made it a big favourite. NetEnt decided it was time to release a sequel and came out with “Victorious Max” which takes things to another level.

When players start this game, they will notice a few changes. The Roman army is still there; ready to take on all comers. However, the background colour is now red instead of green. Players will have five reels to play with and 243 ways to win.

The goal as usual is to score winning combinations and the game has a good set of symbols to work with. There are several low-value symbols which should be familiar to players: the A, K, Q, J, 10 and 9 card suits.

For the more valuable symbols, there are soldiers and centurions. The most valuable symbol though is Caesar. Players who get five of him in a combination will get 200 times their original stake. There is also the golden eagle symbol that acts as the wild for the game. Only found on reels two, three, and four, it substitutes for all symbols.

The great thing about this version of the game is that it takes things to another level. In the original, the maximum that a player could get is 1,500 times their stake. This time around, Victorious MAX will give players 7,000 times their stake on every free spin.

Overall, players who loved the original Victorious slot will be able to appreciate this new version. Players should definitely give Victorious MAX a spin or two considering the high value of each spin. Players who get lucky will be in for a big payday. The Victorious MAX slot is expected to be released in the coming days.

Hurray! There is a competition going between users of our site!
You have to do nothing, but browse out site, and win a daily prize. Click here to read more.
You current ranking:
Time Left: 3h 36m 57s
Gambling is for 18+ though some countries may have other restrictions...Remember you should always Gamble Responsibly
We use cookies to ensure that we give you the best experience on our website. If you continue to use this site you agree to allow us to use cookies, in accordance with our Terms & Conditions.Agree & Close