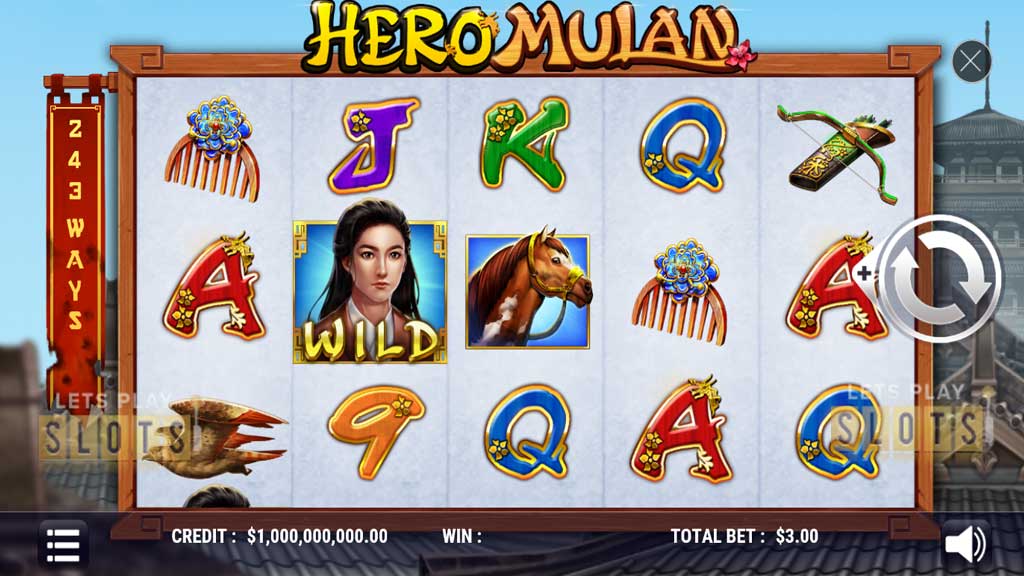 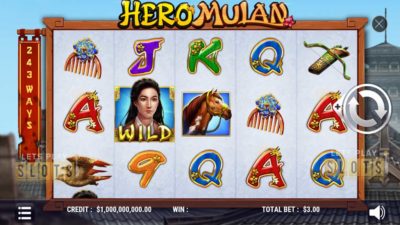 The Mulan story of a young daughter disguising herself as a man to fight for her country is legendary tale in China. The story is not only popular in China but has also made its way to the West and was retold in an animation film. Slot Factory decided it was time to take this story to the next level by using it as the theme for its latest slot titled “Hero Mulan“.

Players who start this game will be taken to an Oriental temple to start with their adventure. Players will then be presented with a five by three grid which is the pay area. Players will have 243 ways to win. All of this is present with the appropriate musical background.

The game has the usual set of card royals as the game’s low-value symbols. They are all rendered in the Oriental theme that dominates the game. You also have the high value symbols. These are the various symbols that appear throughout the Mulan story, which includes warriors, horses, swords and more.

Players will have a range for their betting to see whether they can win big. The lowest betting level is at three credits. This should be low enough so that the cheapest player would be able to play. For high-rollers, players can wager up 60 as their maximum bet. Lucky players can get 1600 times their stake which is pretty impressive.

The game does have a number of special features that make it more than an ordinary slot game. One feature that makes it special is the Wild symbol. This symbol is Mulan and she makes it much easier for players to win. The game already has 243 ways to win and Mulan can substitute for most of the symbols except for the Scatter. The result is that wins are much more available.

Another special feature is the free spins on offer. Players get these free spins by scoring at least three scatter symbols. They appear on reels two to four. Players who are successful in scoring these scatter will be able to choose between five different spin modes. Your choice will be to either get more free spins or have bigger multipliers. The choices present players with a sliding scale of choices. At most, players can get 25 free spins or they can get a 30x multiplier for their minimal free spins.

This game is not only interesting with is theme but also its gameplay. Do give Hero Mulan a few spins when it comes to your favorite online casino.

Hurray! There is a competition going between users of our site!
You have to do nothing, but browse out site, and win a daily prize. Click here to read more.
You current ranking:
Time Left: 22h 22m 14s