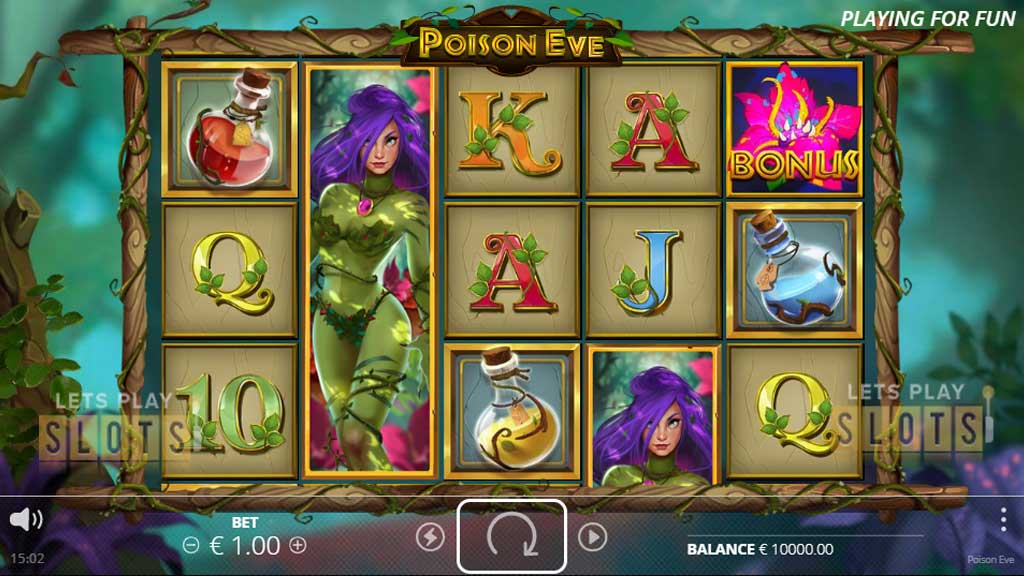 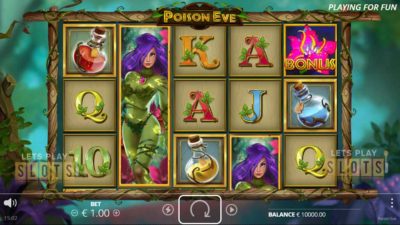 Nolimit City has decided to use a unique theme for their latest slot offering. Players are adventurers passing through the mysterious forest of Pandora when they encounter the fairy known as “Poison Eve“. The enchanting lady has been mixing up some potions and it seems it is time for the players to test their luck against them.

When players start this game up, they will be impressed at the great graphics that this game has.

With the forest background, players get to play on a five-reel, 20 payline grid. Ivy drapes around the frame and the symbols are appropriately flowery. The music is also pretty good and gets you in the mood for mystery and adventure.

Like all slot games, the aim is to get winning combinations. The low-value symbols are the A, K, Q, J and 10 royals. Players who want to win big though should aim to get one of the four potions that come from the Tree of Enchantment. The red potion is the most valuable potion, with five of it giving players 25 times their stake.

For players who want the big jackpot, the special Poison Eve symbol can help with that. It only appears as a full stack, taking over three rows. Players who score five reels of it can get 100 times their stake. The symbols are also special since its appearance activates the Liquid Magic feature. This means that all potion symbols become Poison Eve for that particular spin.

Players can get bigger prizes when they score some of the special symbols. One of them is the poison ivy symbol. It acts as a wild and only appears in the three middle reels. When a wild appears, it takes over the entire reel. This is a big help in winning since it can be any symbol in a combination except for the scatter.

The scatter symbol for this game is the pink flower. If it appears on reel five, which is known as the Hot Zone, the Flower Power feature is activated. Players will then see portals appear depending on how many scatters are scored. A random amount of free spins is also given to players. Players can win more easily as any time a symbol lands in the Hot Zone, it expands to take over reels one and five.

Overall, this is a pretty decent game and should give players both a fun time and a chance to win great prizes.

Hurray! There is a competition going between users of our site!
You have to do nothing, but browse out site, and win a daily prize. Click here to read more.
You current ranking:
Time Left: 5h 48m 56s