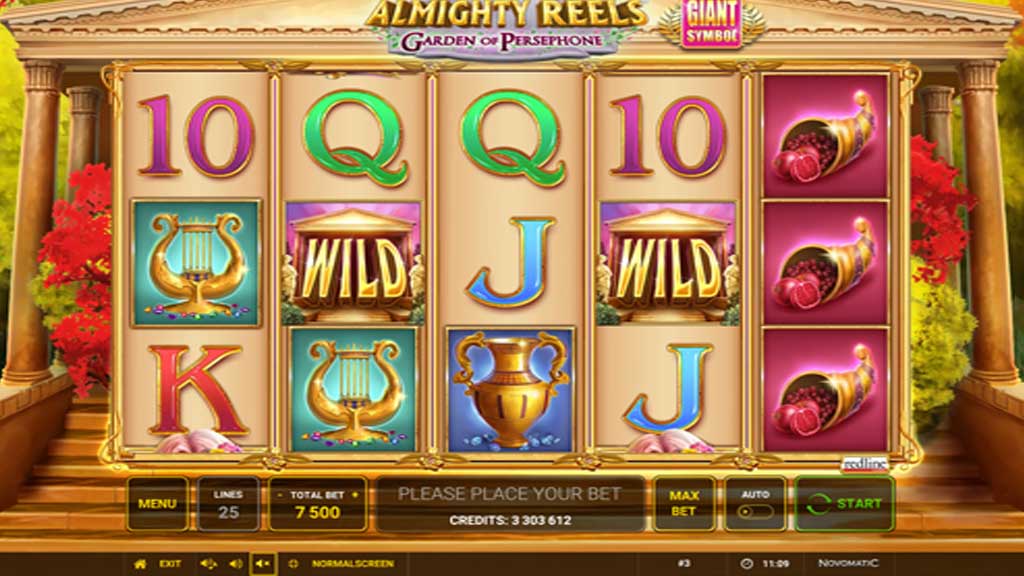 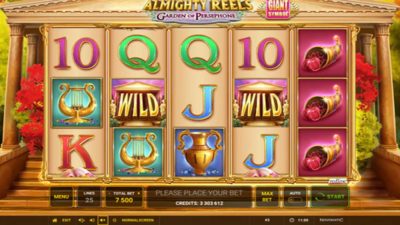 Novomatic has released some really cool slot games over the years and the casino game developer is at it again with its latest release called the “Garden of Persephone“. The designers decided to use ancient Greek mythology as the theme behind the Garden of Persephone slot game.

In this game, players are exploring the ancient goddesses' realm. The great visuals are paired with some interesting gameplay to ensure that players will have a fun time playing this slot.

The full name of the game is Almighty Reels: Garden of Persephone. This is because the five reel, 25 pay line slot game features the Almighty Reels. This is a big 3×3 block of symbols that will come out often during the bonus round. There have been other Almighty Reels featured in games like the Realm of Poseidon and the Power of Zeus and this latest release continues the pattern with the mythological theme.

To return to the basics of the slot game, the visual design of the game has players spinning the reels in the middle of Persephone's garden at an ancient Grecian temple. The visuals are warm and welcoming as you can expect from a goddess of fertility. The symbols are the standard card symbols for low-paying prizes. However, the higher-paying symbols are vases, harps, Grecian helmets, cornucopias, and the goddess herself.

This new game follows standard slot game rules. Players are hoping to get a combination from left to right in the pay lines. Depending on the combination, players will get multiples of their bet. Persephone does have some great rewards and gives players a chance to win our times their original stake.

However, the real draw of the game is the bonus features and the earlier-mentioned Almighty Reels. This shows up when the Free Spins feature is activated. The golden coin is the scatter symbol and when it is activated, players get 10 free spins.

However, before players get to these free spins, they have a choice to make. They will have to select one coin from a selection. This randomly determines which of the high-paying symbols will act as the Giant Symbol when the Almighty Reels activates.

Now when the players spin the reels, there's a chance that a particular symbol will show up. But instead of occupying one block, it will occupy a large block of three by three. This means that it a lot easier for players to score a winning combination. The Giant Symbol will occupy space on reels two to four. The possibility of getting multiple winning combinations can have players winning up to 100 times their stake. Players who like mythology slot games will enjoy this new Novomatic slot.

Hurray! There is a competition going between users of our site!
You have to do nothing, but browse out site, and win a daily prize. Click here to read more.
You current ranking:
Time Left: 19h 9m 0s