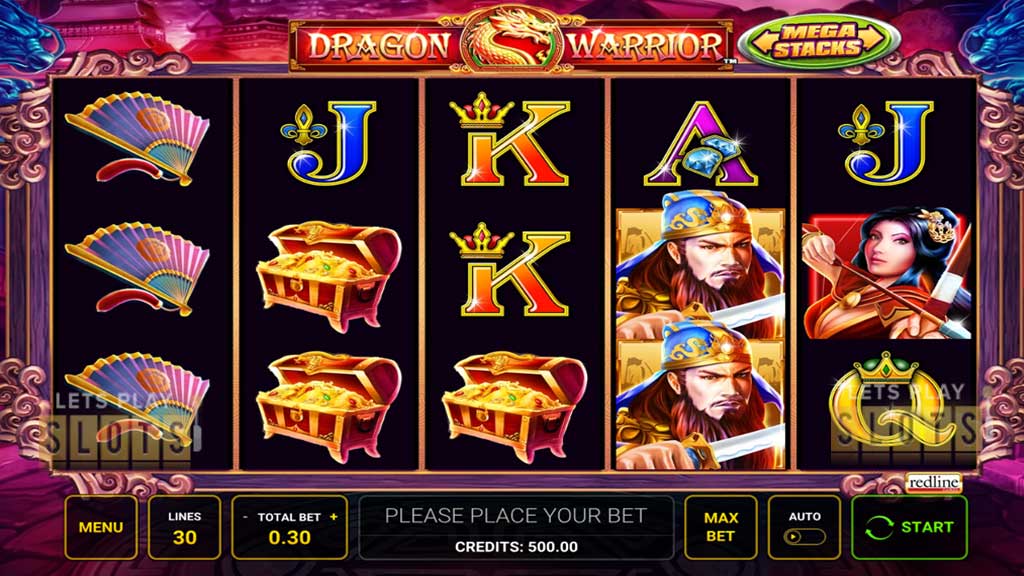 Novomatic has decided to use ancient China as the next stomping ground for its latest slot game. Dragon Warrior is a five reel, 30 payline game which will have players choosing one of three clans to support in the hunt for royal treasures. This is yet another excellent slot by Novomatic and is sure to be a hit with slot lovers.

The game presents players with an action-packed screen combined with some pretty decent audio. Dragon Warrior features the traditional card symbols for its low-paying symbols.

Players may like winning with these combinations to supplement their bankroll but what they really want to aim for are the high-paying symbols.

These high-paying symbols are the three warriors and the treasures they are fighting over. The most rewarding symbol is that of the male warrior. Players who get five symbols of the male warrior on a payline will be able to get 1.6x their original stake. Plus, when a winning combination shows up they get animated as an extra treat.

There is also a very special symbol thrown into the mix. This is the Dragon Wild symbol. When it shows up, it acts like every other symbol except for the scatter. This makes it easier to form the combinations that players need to win. The great thing about the Dragon Wild is it will appear stacked, which usually means that it occupies a full reel.

Though it is possible to win big with just the basic symbols, players know that the real wins are when they activate the special bonuses. For Dragon Warrior, this is possible by having the Red Door bonus symbol. It only appears in the three middle reels and comes across as stacked.

During the free spins, players will get a small bonus of 2x their stake. The game will also randomly choose one symbol before each spin to become a Mega Stack – this means that the symbol will appear as a stacked symbol, occupying multiple slots. This will allow players to win a lot more during their free spins.

Overall, this is a cool slot that can provide players with a nice distraction along with an opportunity to win cash.

Hurray! There is a competition going between users of our site!
You have to do nothing, but browse out site, and win a daily prize. Click here to read more.
You current ranking:
Time Left: 54m 45s