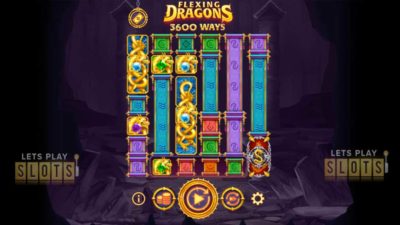 The new game is called “Flexing Dragons” and has great gameplay but a rather minimalist design. OneTouch has kept this game very simple by not doing very little with the design and graphics.

The background is filled with darkness while the only colors are on the reels of the game.

The graphics and audio work well but are definitely not the main focus in this slot.

The gameplay of Flexing Dragons is based around a grid that has six reels and seven rows. That is an impressively large grid and is reflected in the fact that it also has a ton of paylines. There are 117,649 ways for a player to win. A special horizontal reel will appear at the bottom row.

The symbols in the game are also appropriate. No card royals here, just Asian-themed symbols that don’t look out of place. The main difference among the symbols is the color. The other special symbols are the dragons themselves. They are all gold dragons but the difference is the gem they are holding. Players will want to score the ruby-holding dragon because they pay out the most.

The game’s betting range starts at $0.4 and goes all the way up to $100. High stakes players can get a big payout due to the many paylines. Since the game has cascading wins, players can score more wins during a single spin. This game has an RTP of 96.23 percent.

What sets this game apart is its special features. For one, there is the golden dragon egg. It acts as the game’s Wild. It can replace all the other symbols with the exception of the Scatter symbol. Since it only appears on the horizontal reel so it is hard to score.

The scatter symbol is the silver and gold medallion. It can trigger extra spins based on the number of scatters scored. The minimum is three scatters, which can award eight free spins. The maximum is 24 which is reached by scoring six scatters. During the free spins, the scatter only appears on the horizontal reel, the same as the Wild. The game also activates a progressive multiplier. Every time the player wins, the multiplier goes up by one.

Overall, the game is a fun experience and definitely worth a few spins.

Hurray! There is a competition going between users of our site!
You have to do nothing, but browse out site, and win a daily prize. Click here to read more.
You current ranking:
Time Left: 4h 48m 21s