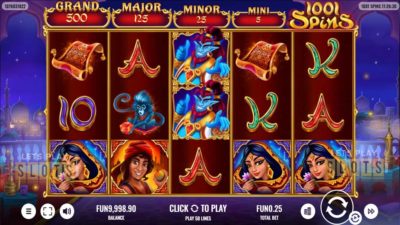 The story of Aladdin and the magic lamp continues to be popular around the world as movie directors, authors and game developers continue to keep the tale alive. Platipus Gaming has come out with a new Aladdin themed slot titled “1001 Spins“.

Players who have watched the Disney themed Aladdin film will immediately notice that the theme and art style for this new slot has a lot in common with the animated movie.

Players will be escorted into a middle-eastern palace which is located in a desert.

Players are then presented with a grid that has five reels and three rows. There are 50 paylines for the game so players have a good chance of winning. The betting range for the game is a bit limited.

The symbols that the game uses should be familiar to every Aladdin fan. First, there are the low-level card symbols. The card royals represent the low-value wins. Players will want to trigger the higher scoring symbols. While Platipus Gaming does not have the Disney license for Aladdin, the developer was allowed to use drawings that look closely like the characters from the animated movie. This is why you see multiple characters from Jasmine to the Flying Carpet in the game. The most valuable symbol is Aladdin.

There are also some special symbols. The Genie is the Wild symbol while the game also has the Lamp Scatter, Bonus symbols, and Jackpot symbols.

The game also has some nice special features. The Wild is there to make wins easier by substituting for regular symbols. Players can also get free spins by scoring three or more Lamp Scatters. Players then get eight free spins. During these spins, a mystery symbol might appear and turn to reveal a randomly chosen symbol. Since the Mystery Symbol can appear stacked, players can get lucky and win big. Players can also trigger the free spins again.

The Bonus and Jackpot symbols are also important. Players who score six or more of them will immediately enter a bonus game with only them appearing. Players will have three respins to score another jackpot or bonus symbol. They can also complete the grid which will award the big 50,000x Grand Jackpot. 1001 Spins has an RTP of 95 percent.

Hurray! There is a competition going between users of our site!
You have to do nothing, but browse out site, and win a daily prize. Click here to read more.
You current ranking:
Time Left: 6h 36m 12s