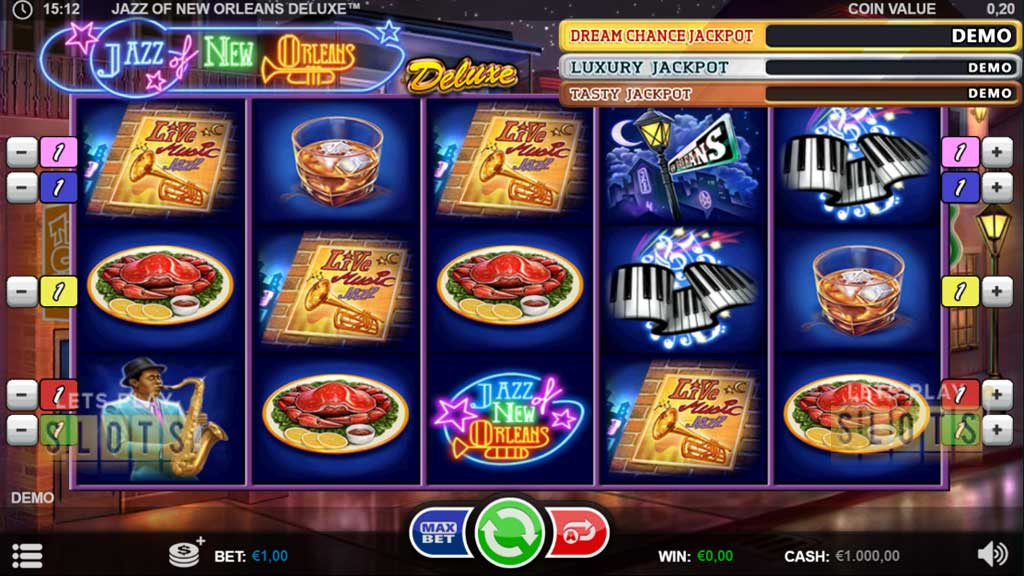 New Orleans is known for a lot of things but one that is the most recognized is its contribution to Jazz. Some of the best Jazz musicians and bands have come out of New Orleans. Slot lovers who like music will enjoy the newest offering from Play ‘N Go called Jazz of New Orleans.

This musical slot presents players with a new experience that can be hard to beat. Plus, it is one of the company’s Progressive Jackpot games – which provides players with the opportunity to get rich overnight.

Jazz of New Orleans is pretty basic in terms of online slot gameplay. The game has five reels and just five paylines.

However, players won’t notice that from the way the game looks. Play ‘N Go put in a lot of work to make the game visually appealing and it shows through some cool graphics. Instead of standard symbols, players are treated to jazz clubs and lobster dinners as the game symbols.

The standard rules apply though. Players need to get at least three of the same symbol on a payline. Each symbol has a different value and that can affect the prize amount. The most valuable ordinary symbol is the jazz songstress. When a player gets five of her on a payline, they will get 20 times their original stake.

There are also a couple of special symbols. There is the wild symbol represented by the Jazz of New Orleans logo. These will act as any other symbol except for the scatter symbol. Getting five wilds in a payline will reward players with 50 times their stake.

The scatter is the moon over New Orleans.  It rewards 15x the original stake when players get five of them in a payline. Surprisingly, no extra feature is activated when the scatter symbol is scored.

Getting Free Spins and Bonuses

The real bonus feature is activated when three or more consecutive wilds are scored. Players are then given a choice of jazz clubs to go to, their choice giving them a chance to get up to 25 free spins. An additional choice can also change symbols into wilds. This feature can be constantly repeated so that a player gets up to 200 free spins.

However, the real bonus is the fact that the game is part of a Progressive Jackpot system. There are golden ring symbols added to the mix during spins. When players score three of them, they get a chance to spin one of the wheels to the jackpot. With Bronze, Silver, and Gold wheels, players have a chance at winning big prizes.

Hurray! There is a competition going between users of our site!
You have to do nothing, but browse out site, and win a daily prize. Click here to read more.
You current ranking:
Time Left: 5h 56m 42s