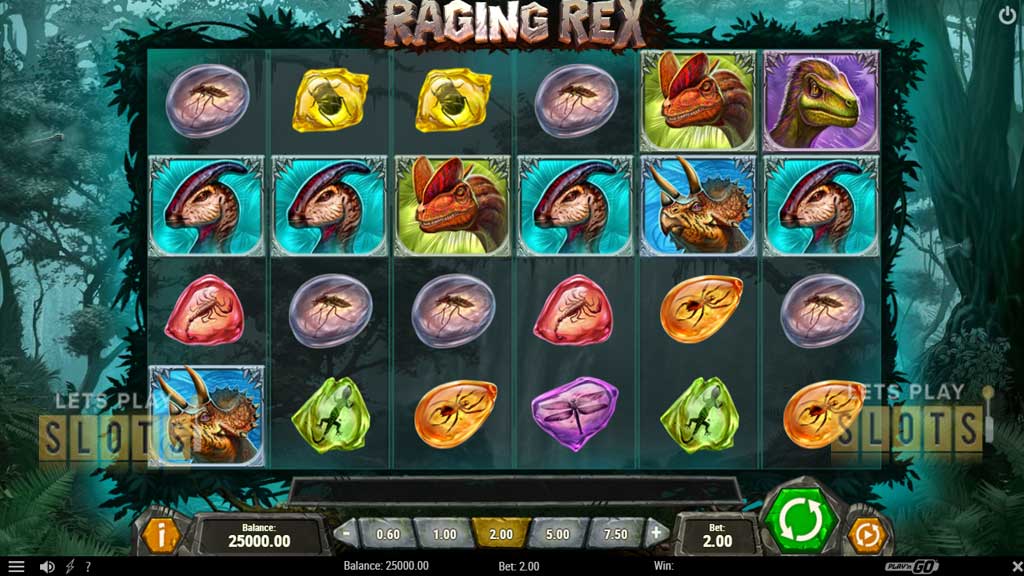 Play’n GO have decided to give slot lovers something interesting to start the New Year with its Raging Rex slot.

The Raging Rex slot game features pre-historic adventure at its finest where players get the chance to become the king in prehistoric times as they take the mantle of the Tyrannosaurus Rex!

In this six reel slot game, players have as many as 4096 ways to win. This new slot gives players a great chance of walking away with a jackpot if they activate the Raging Rex feature!

The game looks great, with a lot of attention paid to the visuals. It has bright colours and nice ambient sounds that will help take places on a great adventure.

As for gameplay, players will like the fact that they just need to have a symbol present in three adjacent reels to score. This makes it a lot easier instead of worrying about paylines.

The symbols are also very appropriate. Instead of card symbols, the low-paying symbols in the game are insects trapped in amber. For higher-paying symbols, there are the various dinosaurs featured in the game. This includes dilophosauruses, velociraptors, triceratops and parasaurolophuses. The most valuable dinosaur is the velociraptor. It returns 15 times the original stake when six of it is scored.

However, the big one is the T-Rex. The giant dinosaur acts as the wild for the game. So when this symbol appears it can act as any other symbol except for the scatter. The great thing about it is that the symbol can appear in a single slot as well as a full stack. When it does appear as a full stack, it gives players respins as it walks towards the first reel. This is a big chance to win a large amount of money.

Jackpot From The Skies

The real jackpot though is when the comet appears. Acting as the scatter symbol, it will give players free spins depending on how many comets appear. At most, players can get 30 respins if they have five comets scored. Also, players have a choice when this Raging Spins feature activates. They can either have wilds appearing with multipliers or wilds appearing in a stack. Plus, players can get more spins if they get more comets.

Overall, this is a pretty fun game. Players who want to experience big jackpots combined with some pre-historic gameplay should try it out.

Hurray! There is a competition going between users of our site!
You have to do nothing, but browse out site, and win a daily prize. Click here to read more.
You current ranking:
Time Left: 7h 57m 51s
Gambling is for 18+ though some countries may have other restrictions...Remember you should always Gamble Responsibly
We use cookies to ensure that we give you the best experience on our website. If you continue to use this site you agree to allow us to use cookies, in accordance with our Terms & Conditions.Agree & Close