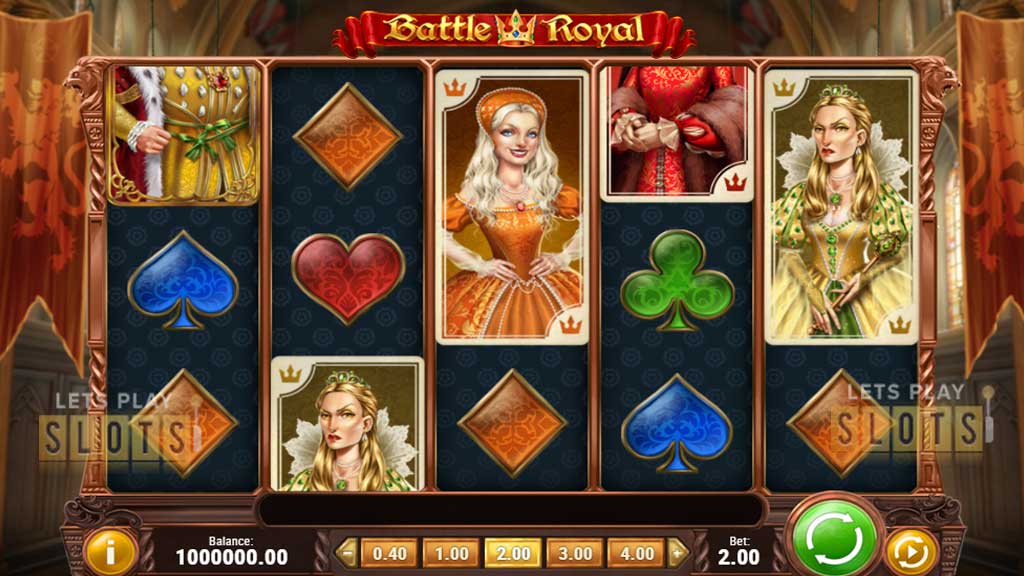 Henry VIII is known for marrying a lot of women and being rather violent when it came to divorcing them. Play’n GO decided to make an exciting new slot game called “Battle Royal” which focuses on Henry VIII and his 6 wives.

In this game, players try to help Henry get treasure from the royal dungeon and avoid the wrath of the ghosts of his ex-wives. This five-reel, 20 pay line game boasts of a maximum payout of 5,000 x a players original stake.

When players fire up this game, they are greeted by the cartoony graphics and an addictive tune in the background. This shows that though the game is based on history, it is still a game designed for amusement rather than any serious historical discussions.

The winning combinations for the game are quite different from the usual. The card suits stand in for low-paying symbols. They don’t pay out much but players will get back their stake and a bit of profit. Additionally, the Royal Flush symbol can randomly activate – which can turn all card symbols on display into a single card symbol. This makes for an easier win.

There are also the six wives symbols which pay out a lot more. Catherine of Aragon, Henry’s first wife, pays out the most. With five of her on a pay line, players will get 60 x their stake. The interesting thing is that the six wives are displayed as portraits. This means that they take up multiple slots – so when players spin, they have to take note of how big a space they occupy.

There are two special symbols. One is the royal seal, which is the scatter and will activate the bonus game the second is and Henry VIII. Henry acts as the Wild symbol of the game and is a portrait like his wives. He acts as any symbol except for the scatter.

The game offers some really interesting bonuses. They are activated when a player gets a scatter symbol on both the first and last reel. Players are then given a choice between the two. They won’t know what they’ll get until they click on the symbol.

The Free Spins feature is interesting. Players select one wife to survive and then they get free spins until it is determined who the survivor is. This is done at random and after every spin, a guillotine randomly drops in one of the reels. After every beheaded wife, their symbol becomes a wild.

If the player’s chosen wife survives, they get a cash prize and their winnings. If they get beheaded though, players will have to play the Long Live The King feature. In Long Live The King, players guide Henry VIII as he explores the dungeon for treasure. The ghosts of his ex-wives will be there though to hunt him. If players get him to safety, they get an additional cash prize.

Overall, Battle Royal Slot is a fascinating little game that players will enjoy.

Hurray! There is a competition going between users of our site!
You have to do nothing, but browse out site, and win a daily prize. Click here to read more.
You current ranking:
Time Left: 6h 12m 7s