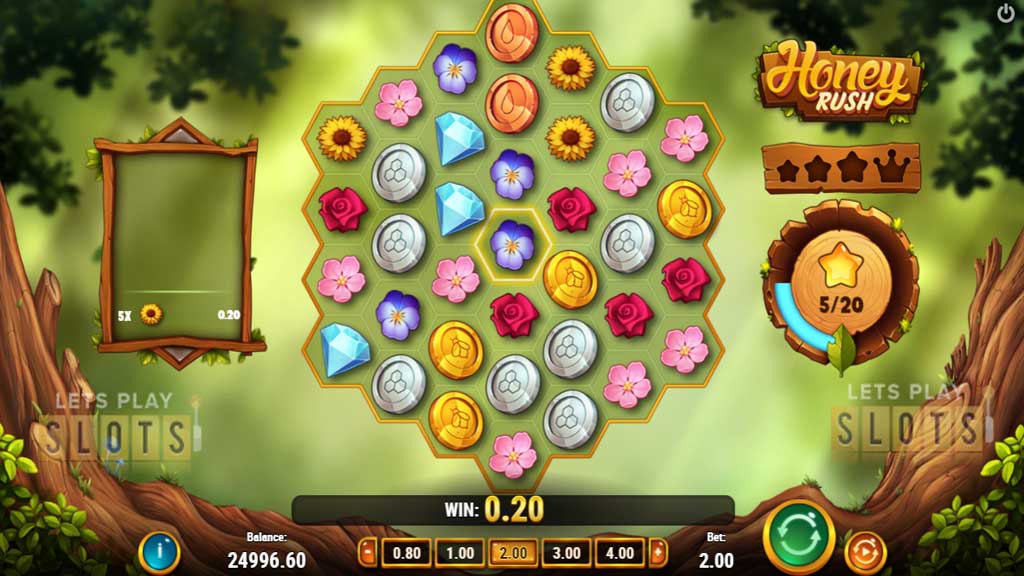 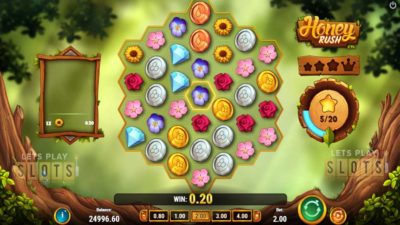 Most online casinos offer players hundreds of new online slots to choose from. While it is always nice to have a big selection of slots to choose from, most slots tend to be very similar in nature. Developers are always looking to come out with a unique theme in order to make their slot stand out from the rest.

Play’n GO has tried to do exactly this with its latest slot released titled “Honey Rush“. Though the theme of this offering is supposedly about bees and honey, it is the unique approach that will attract people to play this game.

The first thing that players will notice with this slot game is that there are no traditional reels. There is a hexagonal grid that is a similar to a honeycomb in the center.

The game features a forest in its backdrop and a nice relaxing soundtrack that will get players in the mood for some fantastic gameplay.

The goal of the game is to collect clusters of five symbols or more in the hex grid. As for the symbols, they are all completely original. Four of them are low-value flowers, while the high value ones come in the form of bronze, silver, and gold coins which give you more profitable wins. There is also the diamond symbol, which is the most valuable symbol of the set. Since players can get up to 35 or more symbols in a cluster, the diamond rewards 200 times their stake as a payout.

The game also features a wild symbol in the form of a honey pot. When it appears, it will be much easier to get a win. Besides getting a win, the game also removes all the winning symbols and new symbols drop down. This can potentially have players getting multiple wins on a single spin.

When a player wins, a meter at the side of the screen gets filled up depending on the number of symbols involved in the win. Once filled, it will level up and give players bonuses. There are four charge levels available. The first level will trigger the Drone Colony feature and add a sticky wild symbol to the grid which provides multipliers to wins. Levels two and three have the same reward. Level four activates the Queen Colony feature.

Overall, Honey Rush is a fun and unique game that will keep players entertained.

Hurray! There is a competition going between users of our site!
You have to do nothing, but browse out site, and win a daily prize. Click here to read more.
You current ranking:
Time Left: 1h 16m 41s