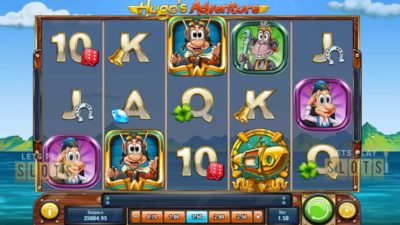 Fans of Play’n GO will be familiar with Hugo. The character stars in three of the company’s cartoonish slot games which have been well received by slot lovers all over the world. Play’n GO decided to bring Hugo back for the fourth time with its latest released called ‘Hugo’s Adventure’.

This time around, Hugo takes his adventure to the sea and the air and players are tasked with the responsibility of helping him out.

Unlike some of the new slot games, Hugo’s Adventure was designed to be simple and players will have no problem figuring it out quickly. The game features five reels and ten paylines. The goal is to score winning combinations of symbols but the ten paylines does make it difficult to do so.

Those who have played some of the previous Hugo games should be familiar with the layout of this new game. The main difference this time around is the setting of Hugo’s adventures. The symbols that are used for the game range from the low value card suits that go from A, K, Q, J and 10. For more valuable symbols, players can get bird pilots, troll stewardesses and monkey mechanics. Hugo in his pilot’s outfit will be the wild symbol and he is very valuable. Five of him will get players 50 times their stake.

Hugo’s adventure comes with two special features that make the game very interesting. The first is Underwater Adventure feature. There are submarine bonus scatters on the reels and when players get two of them, they trigger this feature. Players then have up to three lives to gain treasures from the bottom of the sea. This gives players a cash bonus.

Players then randomly get to pick from the treasure chests. Some of these treasures can damage the players, making them lose a life. If a players ends up losing all their lives, the feature ends. Players who survive until the end of the feature will get to spin the golden submarine to get a random multiplier.

The other major feature is the Aeroplane Free Spins feature. Three aeroplanes trigger this and gives players nine free spins and one life. The additional life is very valuable because players can lose a life it if they hit an air mine. Balloons in the reels will give players an additional life. There are also flying wilds that move across the reels to make it easier to win. Players can even get 16x multipliers because of them.

Overall, this game is a fun one and will keep you coming back for more spins!

Hurray! There is a competition going between users of our site!
You have to do nothing, but browse out site, and win a daily prize. Click here to read more.
You current ranking:
Time Left: 22h 29m 24s