Playtech Gives Players A Chance To Play With ‘Bombs’ With Pirates

Playtech Gives Players A Chance To Play With ‘Bombs’ With Pirates 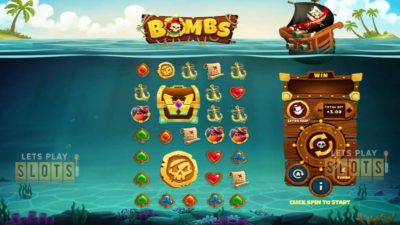 Playtech has a new slot game on the market and this one is really ‘explosive’. The new game is called ‘Bombs’ and has five reels and seven rows, which provides players with a sizable playing field. Combined with some interesting features and 20 paylines, this game is sure to be a hit with players as it gives them an interesting theme and numerous ways to win.

When players start this game up, they will be greeted by incredible graphics of a pirate ship, out on the high seas. The game has great music that gives players the feel of being on a pirate ship. Like most slots, this new game has the traditional card symbols as its low-value symbols.

What players should be looking to score are the high-value symbols which include treasure maps, anchors, and pirate captains. Pirate captains are the most valuable symbol, returning ten times the original stake if there are ever five on a payline. There is also a wild symbol in the form of a treasure chest. It replaces all of the symbols, except for the scatter, and gives back 20 times the stake if five appear on a pay line.

The pirate theme provides the game with some interesting features. For one, players are given the choice of either playing with one or two ships. This determines the number of explosions happening in the game. However, an additional ship adds to the cost of the stake.

It can be worth it though. The pirate ships randomly fires bombs at the reels. The result is a wide range of bonuses depending on the bombs. First, there is the red bomb which triggers a bonus bomb. Then there is the cash prize bomb, random multiplier bomb, and random wild bomb. What is really impressive is the free games bomb, which gives 10 free spins. The mystery bomb rounds things out as it can take the place of any one of the other bombs.

A free games bomb combined with a scatter symbol activates the Boombastic Free Games feature. Besides 10 free spins, each of them has a bigger chance for a bomb to appear. Players can get some huge wins with this along with repeating the free spins bonus.

The new Bombs slot game is expected to hit online casinos soon and players should check it out for a new and interesting experience.

Hurray! There is a competition going between users of our site!
You have to do nothing, but browse out site, and win a daily prize. Click here to read more.
You current ranking:
Time Left: 5h 53m 52s
Gambling is for 18+ though some countries may have other restrictions...Remember you should always Gamble Responsibly
We use cookies to ensure that we give you the best experience on our website. If you continue to use this site you agree to allow us to use cookies, in accordance with our Terms & Conditions.Agree & Close