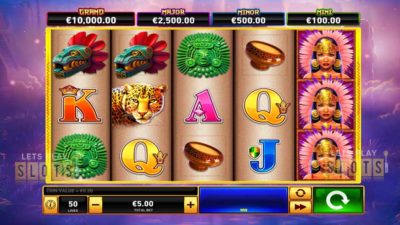 Playtech is hitting the market with a number of new slots this month. The latest release that is expected to hit online casinos soon is ‘Sky Queen‘.

This new slot games is based on a Mesoamerican theme. Players are petitioners to the great Sky Queen, hoping her blessings would help them hit the big jackpot.

The game does have a number of interesting twists though and can be a good time for several spins. There is also a chance for players to win as much as 2,000 times their original stake.

Sky Queen has five reels which is a standard number for most slots but it does have as many as 50 paylines. Thais gives players a decent chance of winning. For a Playtech game, the graphics are rather spare but they are definitely not bad. Players will not be confused when it comes to what buttons to push and they will recognize the symbols easily.

The game has several special symbols. One of them is the Sky Queen, appearing only on reels, two, three, four, and five. She acts as a wild to help complete winning combinations.

Players can get a free game if they score the temple scatter symbols. This depends on how many temples are scored. This starts from three symbols to five symbols. Players who get three symbols will get their stake back and eight free spins. However, more symbols mean more winnings and players can get up to 50 times their stake. Plus, players will be able to retrigger the free games for a maximum of 16 free spins.

The sun symbol is another symbol that appears in the game. Players only need for them to appear on the screen to activate them. With six or more, the Fire Blaze Respin feature is activated, giving players three free spins. During this bonus game, the sun symbols will lock into place and feature either a cash prize or Jackpot Star icon.

Players who fill up all the reels with sun symbols get the Grand Jackpot which is worth 2,000 times their stake. All the revealed cash prizes on the sun symbols will also be added. Jackpot Star icons can potentially give up to 500 times a player’s stake.

So if you are looking for a slot with a simple design and decent payouts, do check out Sky Queen.

Hurray! There is a competition going between users of our site!
You have to do nothing, but browse out site, and win a daily prize. Click here to read more.
You current ranking:
Time Left: 35m 12s