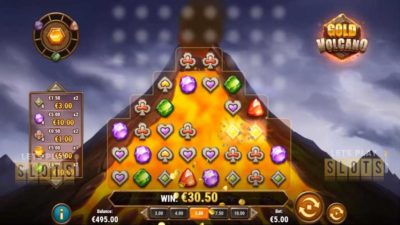 Dormant volcanoes are majestic sights and many of them are tourist locations all over the world. The problem with them is when they become active and explosive. Play’n GO decided to use this as the theme for their latest slot titled “Gold Volcano“.

In this game, players are waiting for the volcano to explode because when it does, good things are in store. When players start this game up, they are taken to the volcano’s location. Players look up at the huge volcano just as dawn is about to break. The sound effects are also pretty good and in line with what players can expect from an exciting game like this.

The game has a pretty interesting setup. There are eight reels with varying heights.

The configuration ranges from three to six symbols high. This may sound confusing but the layout is more understandable with the rules. Instead of paylines, players can only win when they get a cluster of four symbols. Despite the unique rules, the game still has a decent RTP of 96.20 percent.

The symbols are pretty interesting for this game. The basic ones are the four playing card suits: Spades, Diamonds, Clubs and Hearts. Since it is a volcano spewing riches, players get to see other symbols. This includes Green, Red, Purple and Gold Gemstones. The most valuable symbol is the Gold one. Players who score a cluster of 30+ symbols will get 1,000x their stake. There are also Wild symbols to increase the chances of winning.

The game is all about the volcano exploding so players can expect to see quite a few special features. For example, while the volcano is still in a dormant state, three potential things may happen. First, the volcano could rumble which causes the symbols to shuffle around and a scatter symbol gets created. Second, Lava might come out and add more symbols. Finally, an Excavate can reveal a maximum of five Wilds on the grid,

Players can also trigger the Pressure Feature when they win. This removes all the winning symbols and new symbols are dropped. Players can potentially activate symbols for the Crystallization Feature. Scatter symbols are collected and those who complete it get a Gold Gemstone. Finally, players who score six consecutive cascades get five free spins. The entire 8×8 grid will open for this one.

Overall, this is a fun game and can provide you with explosive wins.

Hurray! There is a competition going between users of our site!
You have to do nothing, but browse out site, and win a daily prize. Click here to read more.
You current ranking:
Time Left: 20h 39m 31s