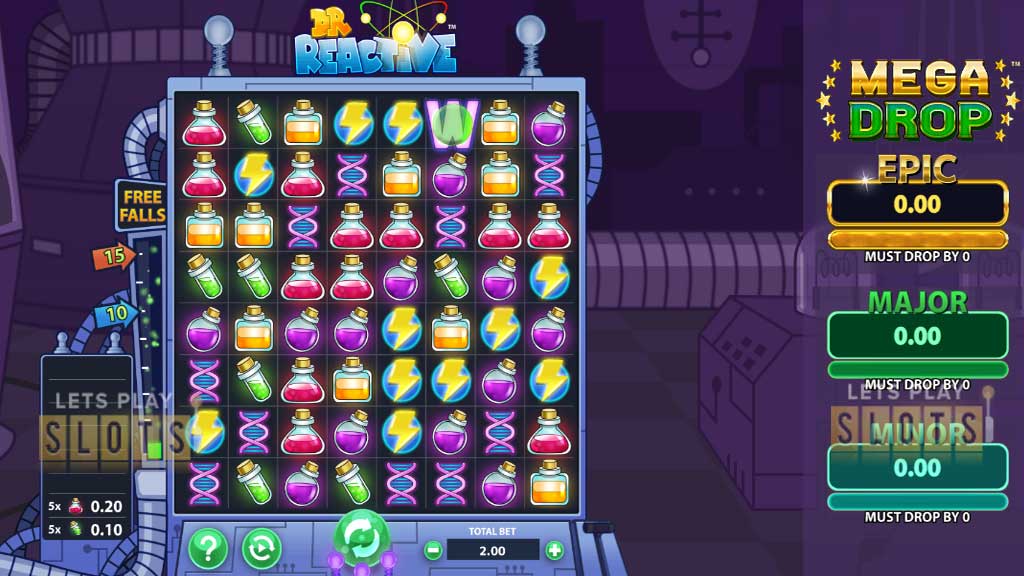 Prepare To Experiment With Chemicals In “Dr. Reactive Mega Drop” 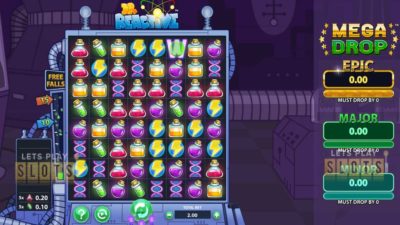 Chemical reactions can be dangerous but they can also be fun, when you know what you are mixing together.

WMS decided to come out with this unique chemical explosion slot called “Dr. Reactive Mega Drop” Slot to give its players an interesting theme that will keep them engaged throughout the game.

In this new slot, WMS takes players to the lab of Dr. Reactive and gets them to compete and create the biggest explosions. This is a fascinating game that should have players enjoying some chemical fun.

When the game starts up, players are taken to the lab so that they can play around with the good doctor’s chemicals. The game is played on an 8×8 grid. Instead of the typical paylines, this game gets players to try to form clusters of symbols. A minimum cluster of five is necessary to activate a winning combination.

The symbols in this game are mainly the beakers full of chemicals, the lightning bolt and the DNA symbol. Players can get a cluster maximum of 15 symbols. The most valuable of these is the DNA symbol, which pays out 50 times a player’s stake.

However, the game has a bit of a special bonus for winning. Winning combinations are removed from the game and then new symbols are dropped down. This means there is a chance that new winning combinations are formed. The cascading continues as long as players get wins. Besides the cascades, players can get more wins thanks to the W symbols, which is the wild. If a player scores a wild, there is also a chance that it has a multiplier associated with it so a player can get a big win.

The game also has some very special reactions associated with some of the symbols. The atom symbol activates most of them. For example, when an atom symbol drops down beside the DNA symbol, the entire reel and row of the DNA symbol are cleared automatically. A cascade then happens to give players a chance at the win. Another special reaction is when the lightning and the atom match. All across the grid, all the lowest-value symbols are erased and a cascade happens.

Players can also get big free spins. This happens when players get at least five cascades from a single win. Overall, this is a fun slot game and is also a part of the Mega Drop network. This means there is a chance to hit it big with a £200,000 jackpot on the line!

Hurray! There is a competition going between users of our site!
You have to do nothing, but browse out site, and win a daily prize. Click here to read more.
You current ranking:
Time Left: 9h 8m 42s