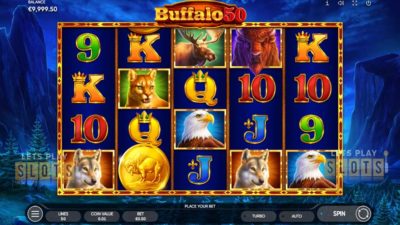 The great plains of North America were filled with some great wildlife before civilization took over and got rid of some amazing wildlife.

Players who want to go back to those times can do by playing the latest slot from Endorphina called “Buffalo 50“.

Players are taken to the Great Plains, with mountains in the background set against a night sky. The developers have decided to use Native American music in the background, which sets the scene for this game.

The buffalo is a sacred creature to Native Americans and players will be tasked with hunting this sacred animal in this slot game.

The game has five reels and four rows as its main grid. This has 50 active paylines for players to win.

The game has an interesting mix of symbols. The card royals slot in as the low paying symbols while the thematic wild animals make up the high paying symbols. The wolf and the moose are the least valuable of the animals, while the puma and the eagle give out bigger payouts. The most valuable symbol is the buffalo. It can reward players up to €1000 on a lucky spin.

The game has a nice set of special features that can help a player to get some big wins. The buffalo acts as a Wild symbol and can substitute itself for most of the other symbols to make a winning combination. The only exception is the scatter symbol. When the buffalo symbol shows up, a player’s chances of scoring a win increases.

The game also has a scatter symbol which is a gold coin of a buffalo. It has a very good payout and can reward extra spins. Players get five free spins when they score three scatters on the reels. During these free spins, players can get five more if they score another three scatters.

Besides these two features, players have a chance to multiply their winnings. Every time they get a winning combination, players are presented with a choice. They can gamble their winnings and hope to get a win multiplier. If they go for it, they choose from five cards to try and beat the dealer’s card. If they win they get the multiplier. If they don’t, the players lose their prize.

Do give Buffalo 50 a few spins when it shows up at your favorite casino.

Hurray! There is a competition going between users of our site!
You have to do nothing, but browse out site, and win a daily prize. Click here to read more.
You current ranking:
Time Left: 4h 34m 24s