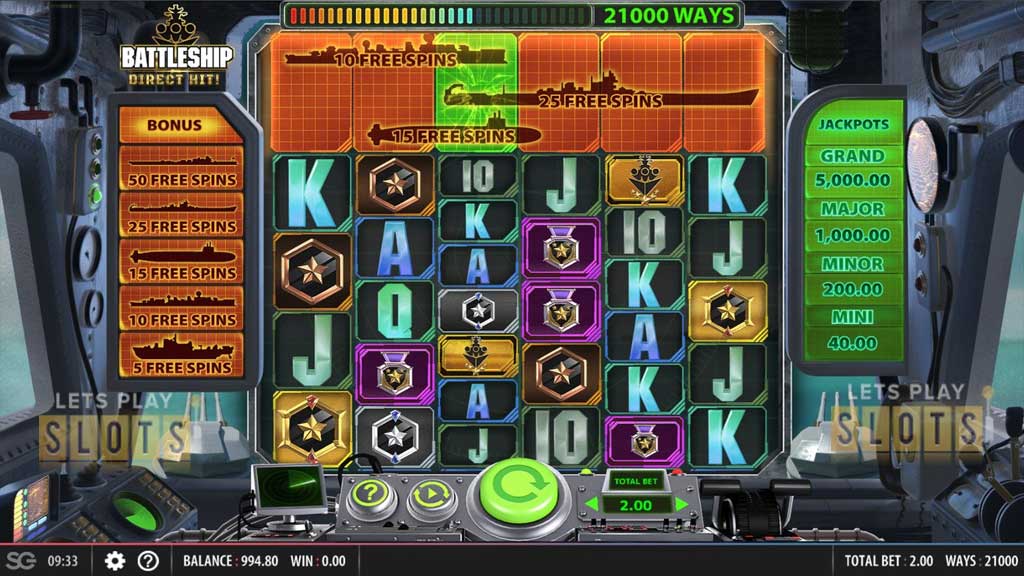 Battleship is a beloved board game classic that has thrilled players around the world. Now Red 7 Mobile and WMS have worked together to translate the hit game from Hasbro to an online slot which they have titled ‘Battleship Direct Hit’.

The game presents players with a unique play screen of six reels and 117,649 ways to win. Those who loved the original Battleship game will definitely find this an interesting experience.

Players are greeted with the bridge of a battleship as they start the game. The goal is to destroy the opposing ship by getting winning combinations on the reels. Unlike traditional games, there are no clearly defined rows in this game. Instead, symbols have different sizes and winning combination are scored if the symbols are touching each other.

The symbols in the game are a mix of the traditional and the new. For low-paying symbols, there are the basic card symbols. The medals are what will pay out better. The most valuable one will pay out eight times the original stake if six of the symbol is part of a row.

The amount may seem small but there is another feature that makes it easier to win big. Winning combinations are “sunk” and removed from play. The rows then drop down which could result in new winning combinations being produced.

There is also the turret fire feature. Sometimes, the turrets at the bottom of the screen randomly release a barrage of artillery fire. This can eliminate low-paying symbols with high-paying ones. A battleship symbol acts as the game’s wild and can be any other symbol except for the missile.

Sinking The Big One

Missiles are the game’s scatter symbol and they have a fun way of resolving. At the top of the reels, there are target ships that show up. When missiles show up, they are launched into them. If there are enough missiles, a ship is sunk and the player gets the corresponding amount of free spins. This can mean anywhere between 5 free spins to 50. Sometimes, two aircraft carriers show up and players can win up to 100 free spins.

During the free spins, wilds will be plentiful – raising the chances of winning. Additionally, players can win extra jackpots that will be sure to put a smile on their faces. Missiles scored during free spins can sink ships to give more free spins or the jackpots that multiply their stake.

Hurray! There is a competition going between users of our site!
You have to do nothing, but browse out site, and win a daily prize. Click here to read more.
You current ranking:
Time Left: 5h 26m 27s