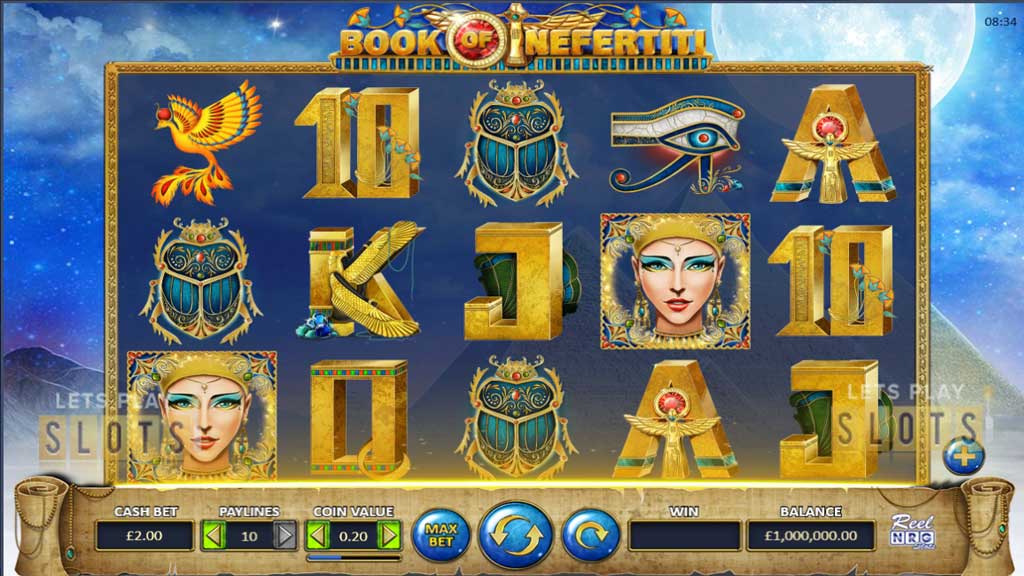 ReelNRG Goes Back To Ancient Egypt With The “Book of Nefertiti”

Ancient Egypt is a theme that slot developers use heavily to come out with games that revolve around myth and treasure. While many Egyptian themed slots feature Cleopatra, ReelNRG has decided to come out with a new angle and this time around they are focusing on Nefertiti and her unique position in the story of Ancient Egypt.

Even though this game has a new angle to it, players won’t be able to escape crawling into the pyramids. Players who start this game up will have to find the “Book of Nefertiti” in the pyramids to find hidden treasures. The graphics in this game are really good. A mysterious soundtrack with the background of the night sky, sets the mood for the game.

The game has the usual mix of symbols. The playing card royals are all in gold, while the thematic ones are well-rendered. This includes symbols like scarab beetles, the Eye of Horus, the book and Nefertiti. The book and Nefertiti are the most valuable symbols and they can give out 5000x a player’s stake if they get all five reels to show them.

The great thing about winning combinations is that the thematic ones will only require two for the win.

The game’s grid is the standard 5×3 and there are 10 paylines to wager on. Betting ranges are a bit small since they range from $0.01 to $30. The RTP is pretty high though at 96.05 percent. Additionally, high volatility means that a small wager can turn into a big win.

The game has some very good special features. Instead of separate symbols, the Book of Nefertiti symbol acts as both a wild and scatter symbol. Players can use it to win big if they get lucky.

When players score three or more of the books, then can get 10 free spins. That may not sound like much but considering how easy it is to score with its presence, there is a lot you can win with just the basics.

When the free spins start, players will see the game choose a random symbol. During the free spins, it will act as the expanding symbol. When it lands, it will cover an entire reel, which will make things or those looking for a win.

Overall, the Book of Nefertiti is definitely worth a few spins, especially with the 5000x win.

Hurray! There is a competition going between users of our site!
You have to do nothing, but browse out site, and win a daily prize. Click here to read more.
You current ranking:
Time Left: 22h 2m 50s
Gambling is for 18+ though some countries may have other restrictions...Remember you should always Gamble Responsibly
We use cookies to ensure that we give you the best experience on our website. If you continue to use this site you agree to allow us to use cookies, in accordance with our Terms & Conditions.Agree & Close