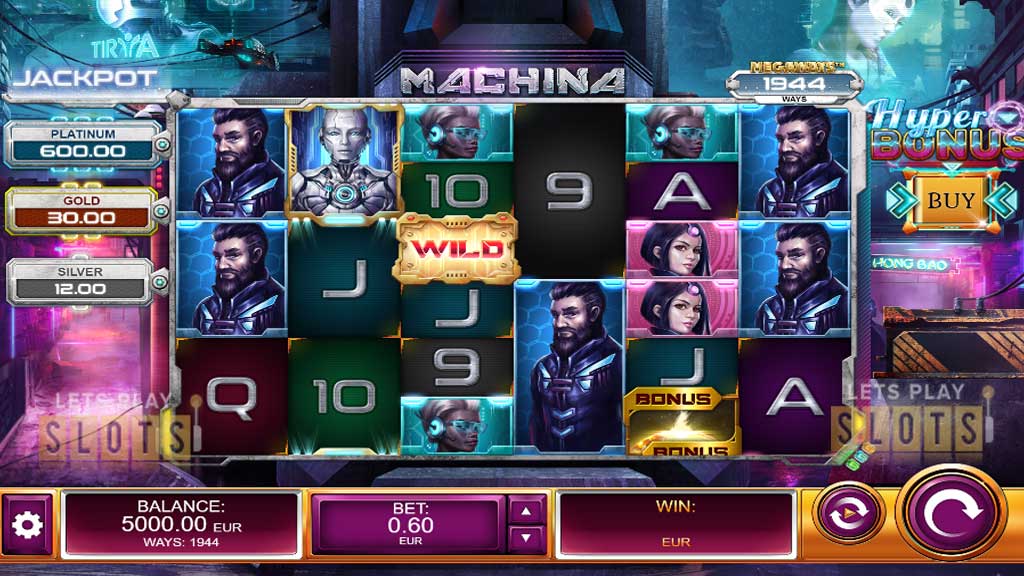 The MegaWays engine is a flexible slot game engine that can be adapted to various themes. Machina MegaWays from Relax Gaming and Kalamba Games takes this slot game engine to the future with its sci-fi theme. With six reels and 46,656 ways to win, players will be sure to walk away with a win or two under their belt.

The setting of this new slot game is a futuristic cityscape where players hope to get their winning combinations. Players will like both the theme and the graphics used in this game which resembles a cyberpunk style. As for the gameplay, it has all the familiar beats with just a few twists to make it fresh for players. The low-paying symbols are the familiar card symbols. Players who end up with these symbols can expect small prizes.

The real prizes are the higher pay symbols. There are five of them, each one gets animated as they become part of a winning combination. The most valuable one is the cyborg, which can give players back 3.33 times their original stake.

There are an additional two symbols available. There is the microchip which can act as any other symbol except for the bonus symbol. The bonus symbol is the gold orb exploding and a player can win big when they get this symbol.

There are a couple of bonuses that are sure to make players love this game. There is the Hyper Bonus feature. Players get this by landing at least three bonus symbols in a spin. Players will get an added multiplier to their win and also get more free spins. The most players can get is 18 free spins.

During the Hyper Bonus feature, when a wild is scored, it is collected in a meter on the screen. When it is filled up, players get two extra spins. Plus, it turns one of the human symbols on the screen into a cyborg. After that the meter resets. As the game continues and the meter is filled up again and again, more free spins are earned and more symbols are morphed. A really lucky player will be able to convert all humans into cyborgs.

Players will want to hit the jackpot as that is where the big money is at. There are three jackpot prizes on offer in Machina MegaWays. These jackpots are only won by landing at least 10 cyborgs in a single spin. The most valuable jackpot will earn back players 1,000 times their stake.

Hurray! There is a competition going between users of our site!
You have to do nothing, but browse out site, and win a daily prize. Click here to read more.
You current ranking:
Time Left: 16h 20m 12s