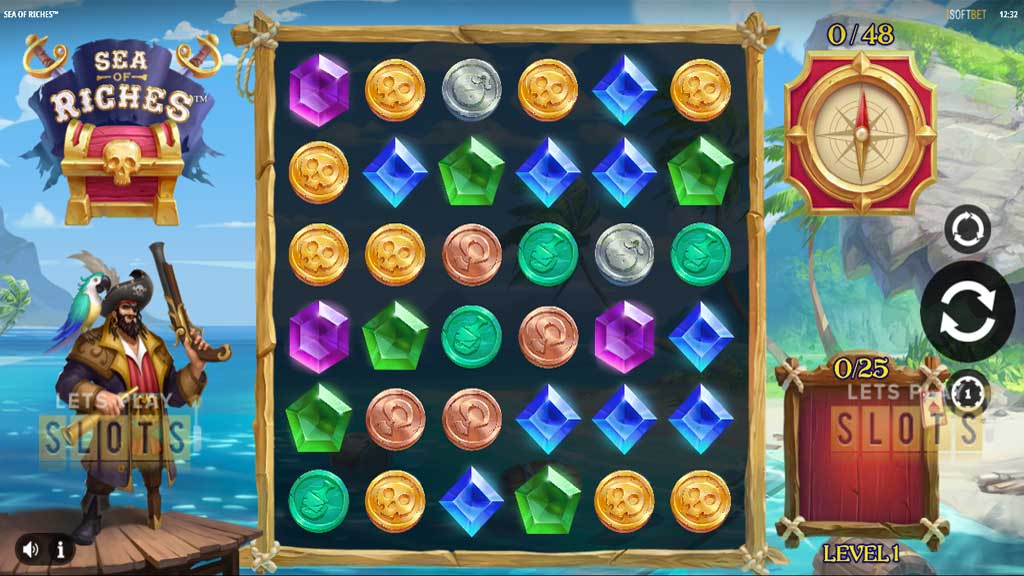 Sail Out To Find Treasure With iSoftbet’s “Sea Of Riches” 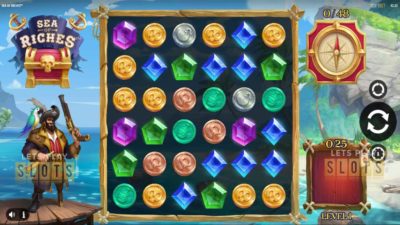 iSoftBet has come out with its latest pirate themed slot titled “Sea of Riches“. This pirate themed slot is different from all the other iSoftbet slots with this theme as it uses the Cluster Pays mechanic. Players are taken to the middle of the ocean and presented with a treasure island. A pirate shows up on the scene and gets the action going.

The grid is placed over the blue seas and has six rows and six reels. Since the game uses the Cluster Pays mechanic, there are no paylines. Instead, players hope to match symbols into clusters. To get a win, players need five symbols clustered together no matter what direction.

The game’s symbols are an interesting set. There are the four coin symbols, which are the low value symbols. Then there are the various colorful gems, with the red being the most valuable. The most that a player can get from it is 150x with 15 symbols in the cluster. The maximum amount of symbols in a cluster is 15, which is pretty big.

The game also has an interesting betting range. It starts at a pretty low $0.2. Then it goes all the way up to $200. That is a very high betting maximum and should attract a lot of high rollers.

The game has several special features. One is the Wild symbol, which is a map in a bottle. It should be a big help to complete the clusters that the game needs. But it also activates the Treasure Map feature, When players collect one, the game records it. Players need to score the Wild symbol 25 times to fully activate the Treasure Map.

Players then go up one level. Depending on the level, players will get a random feature. This includes the Wild Kraken which changes 5 to 10 random symbols into Wilds. Next, a Wild Storm can turn 3 to 9 random symbols into Wilds. There is also the Wild Whale and Wild Ghost ship which releases more wilds onto the reels. After that, the game continues to collect message bottles to go up another level.

Players can also activate the Captain’s Compass feature. This depends on the highest number of symbols in a cluster. Players who get 24 or more symbols will trigger it and get incredible modifiers like symbol removal and extra spins. Sea of Riches has an RTP of 96 percent.

Hurray! There is a competition going between users of our site!
You have to do nothing, but browse out site, and win a daily prize. Click here to read more.
You current ranking:
Time Left: 37m 42s