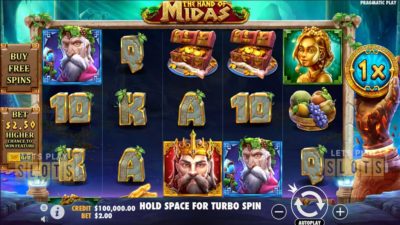 The story of King Midas is very popular throughout the world. The legend still lives on through comics, books and slot developers that continue to use King Midas as a central character. Pragmatic Play has done precisely this with their latest slot release titled “The Hand of Midas“.

Players are taken back in time and they get to experience the power of gold. The action happens in an ancient temple with an appropriate soundtrack backing things up.

The game features five reels and three rows. This is a familiar grid setup and gives players 20 ways to win. Players will also appreciate the wide betting range.

Starting at $0.20 and going all the way up to $100, players will have a lot of choices when it comes to how much they can wager.

The minimum bet allows for players with low bankrolls to keep spinning the reels, while high rollers will love the high maximum. Considering that the maximum payout for the game is 5000x, high rollers should enjoy this game.

The game has a nice set of symbols. There are the usual card royals, which offer the lowest payouts. Then there are the thematic symbols that include fruit baskets, treasure chests and King Midas to name a few. The highest paying symbol is King Midas himself. He pays out 20x when you get five of him on a payline. The game also has a couple of special symbols. The Golden W is the wild symbol and the golden hand is the game’s scatter.

The Wild does not just substitute for all the regular symbols. It also carries a multiplier that can increase the bonus of the prize when it lands. These can range from x1 to x3. The current multiplier level is shown at the right of the reels.

Additionally, during these bonus rounds, the Wilds will be active and become sticky. This means they will remain in place until the bonus spins end. Additionally, if players don’t win a specific amount, the bonus rounds are triggered again to add more prizes. Hand of Midas has an RTP of 96.54 percent.

Hurray! There is a competition going between users of our site!
You have to do nothing, but browse out site, and win a daily prize. Click here to read more.
You current ranking:
Time Left: 6h 9m 6s