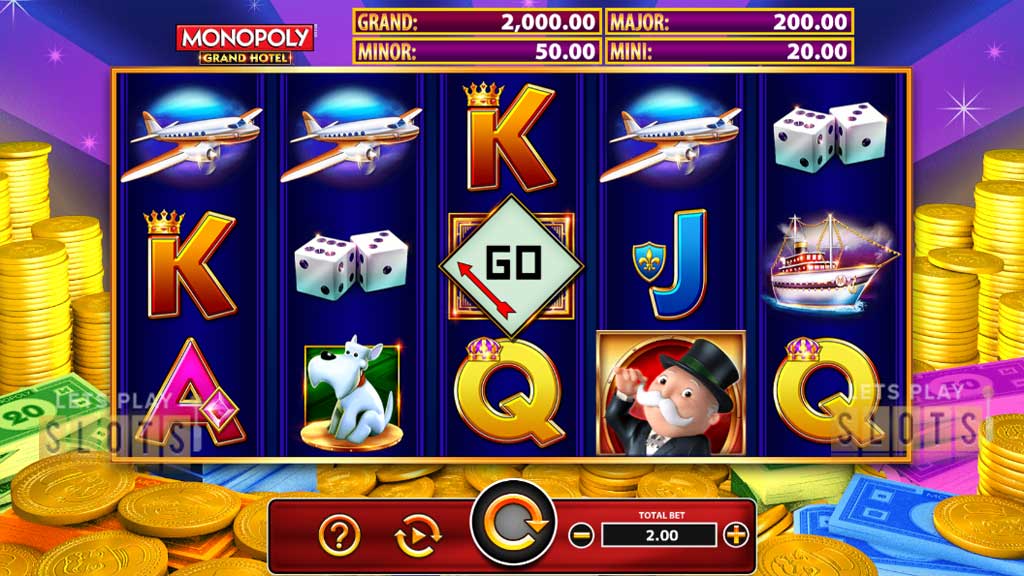 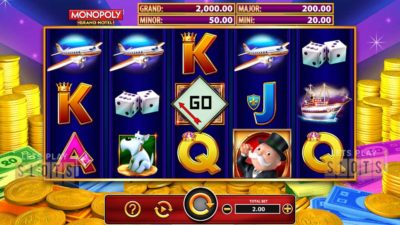 The popular Monopoly board game has been around for nearly a century. The brand is recognizable and has undergone many changes across the years. A number of slot developers have also used the game to develop slot games to cater to the popularity of this game. Now, Shuffle Master has decided to come out with a new slot called “Monopoly Grand Hotel“.

Players will immediately recognize the theme of this game. Thanks to the licensing deal with Hasbro, players will see all the various symbols that are associated with Monopoly, even the recognizable Uncle Penny Bags. The atmosphere of the game feels like the traditional 1930s with music to match. There are even piles of money to add to the ambiance of the game.

The game features five reels and three rows. For paylines, the game has an incredible number of them, 50 in total. The game’s symbols are a mix of Monopoly symbols and card symbols. Players will usually need three symbols to get a win but for the dog or free parking symbols, only two are needed. The game is very volatile so players will have a chance of winning big. Unfortunately, the high volatility means that the RTP is set at 95.42 percent.

The game has several special features. It begins with the GO symbol. Players who know Monopoly should know about how important the GO symbol is to the game. For the online slot experience, it acts as a bonus symbol. It only appears in the three middle reels and when it does appear, players get to spin on the GO reel.

The GO reel is a bonus wheel that awards players with a variety of prizes. Players can win up to 20 times their stake on a simple bonus award. The GO reel also has jackpots, which can award 1000 times a player’s wager. Finally, it can award free spins.

The Free Spins are another special feature. Players can get it either through the GO reel or getting six hotel or house symbols in one spin. Very lucky players can keep on triggering it to get a maximum of 240 free spins. During these free spins, players can also get the Free Parking bonus which has a massive 50x multiplier.

Players should give Monopoly Grand Hotel a few spins when it hits their favorite online casino.

Hurray! There is a competition going between users of our site!
You have to do nothing, but browse out site, and win a daily prize. Click here to read more.
You current ranking:
Time Left: 19m 17s