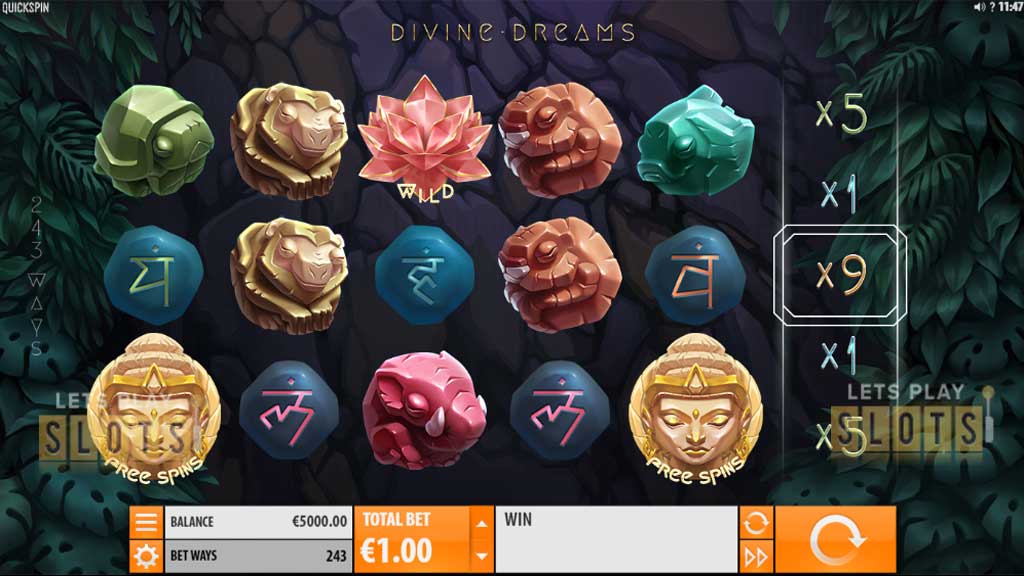 Quickspin is taking some time out from the usual slot themes and is exploring something unique with its latest slot called ‘Divine Dreams’. In this slot game, players are exploring the rainforests of Indonesia while on their way to find the Goddess of Wealth and Prosperity. This game’s five reels and 243 ways to win can potentially bring players a whole lot of money if they get the right combinations.

The game’s graphics are top-notch and players will enjoy them. With the rainforest to the sides, the reels will display the symbols that will determine how much players walk away with. Considering the theme, there are no card symbols here. The low-scoring symbols of the game are the artifact stones, while the stone animals are there for high payouts with the elephant being the most valuable symbol.

Players just need to have the matching symbol in adjacent reels – as there is no need to match them by row. This means that if a player has the tiger on reel one, they will only need to have it on reels two and three to get the minimum reward.

The game throws in a twist though. Besides the basic reels, there is a multiplier reel. When a player wins, the middle row for this reel adds a bonus multiplier to the win. This can reach up ten times the original winning multiplier and gives players the chance to even more.

Players will love that there are two special symbols for the multiplier reel that makes the game a lot more profitable. There is the Yin Yang Wild which will give players two wild symbols randomly. This can potentially turn the current combination into a winning one or a more valuable one.

Finally, there is the free spins symbol in the main reels. Get three of these and players will get up to 20 free spins. During these free spins, a +3 spin symbol will also be available in the multiplier reel. Overall, Divine Dreams is a fun and profitable game that players should try in 2019.

Hurray! There is a competition going between users of our site!
You have to do nothing, but browse out site, and win a daily prize. Click here to read more.
You current ranking:
Time Left: 9h 21m 15s