Spearhead Studios Lets You Explore The Galaxy With “Meganova”

Spearhead Studios Lets You Explore The Galaxy With “Meganova” 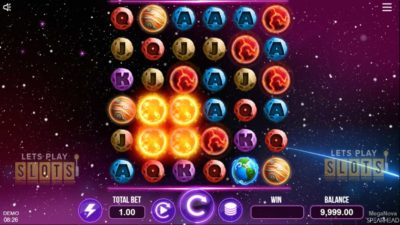 Space and the different galaxies out there continue to fascinate millions of people around the world. Movie producers, authors and comic book developers have used outer space as their theme to give viewers a glimpse into the unknown. Now, Spearhead Studios has decided to come out with its own space themed slot called “Meganova“.

In Meganova, players are the captain of a starship on a journey of exploration. The background highlights this as players see the dark emptiness of space among the stars. This is not an empty and static background and it comes alive with colors and sounds as shooting stars pass by. You have some great electronic music pumping in the background to keep you focused on the game.

Players are given a grid of six reels and six rows to play with. The game does not have the normal paylines that people have come to expect. Now, players have to form clusters of symbols to get a win. The game features eighteen symbols. This time around, the symbols are the various celestial bodies. Ten of them are low-value but there are also eight very valuable symbols which are the various planets. The most valuable one is the Earth itself. This game has an RTP of 96.41 percent.

The base game is pretty fun but things get even more exciting when you go to the next level as this is where the special features come in. When you see the Sun, you have reason to get excited. It is the game’s Wild symbol. Instead of a normal wild, when it lands, it will completely transform the area around it. That is a pretty sizable part of the grid. But that doesn’t end the bonus. The four wilds that appear are locked into position and players get a respin.

When players respin, the spaceship goes into high gear and the background explodes into warp speed. Players then get a good spin until the reels stop. They have a pretty good chance of getting a large cluster thanks to the sticky wilds. But they can also potentially get another respin if more Wilds show up. This can mean win after win if players are lucky. At most, players will get three respins.

The great thing about this is that when wilds overlap, win multipliers will be applied to any cluster that has them. The maximum that they can get is 1,670 times their stake. Meganova is a lot of fun and is definitely worth a few spins!

Hurray! There is a competition going between users of our site!
You have to do nothing, but browse out site, and win a daily prize. Click here to read more.
You current ranking:
Time Left: 4h 21m 36s