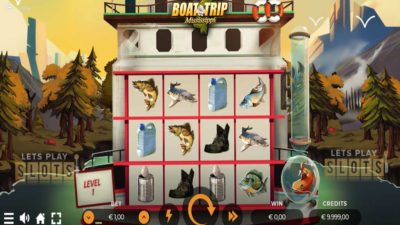 The Mississippi River is the biggest river in the United States and reaches various parts of the country. Spinmatic decided to use the great Mississippi river as the main theme in its latest slot release. The new game is called “Boat Trip Mississippi” and takes players a fishing boat down the majestic river. Players who get lucky will get a big catch.

When players launch this game, they are presented with an image of their riverboat as it steams down the Mississippi.

The background music has that beautiful Southern feel to it and gets you right in the mood to explore what the Mississippi has to offer.

When it comes to gameplay, players will be working with only four reels and three rows. The smaller number of reels means there are fewer ways to win. Players will have only 81 ways to win though there is a possibility to raise it to 243 ways. The RTP for this game is 95.67 percent.

Betting for this game starts from $0.25 and goes to $100. The game allows for some big wins depending on the symbols scored. The symbols come in the form of the different fish which are found in the Mississippi river. Depending on which symbols they get, players can win anywhere between 4x to 200x their wager.

The collect feature is the main feature in this game that allows players to collect symbols. The collect feature is linked to all the other special features in the game. Players collect one fish symbol after each spin. There is a progress meter by the side that tracks the amount of fish collected. When it reaches a certain level, the level changes and players move to a different level. This is an interesting move for a slot game and makes the game a lot more interesting.

Each level has a different effect. During the first level, a wild symbol is added to the game’s symbols. This will make it easier to win since it can act as any other symbol. The second level adds another row of symbols which gives players another chance to win. The third level has moving wilds added to the reels. Finally, the fourth level is where players get 12 free spins with 2x multipliers. After that, players get to reset the game and start from scratch.

Overall, Spinmatic‘s Boat Trip Mississippi brings something interesting to the slot table. Players will love the sense of progress thanks to the collecting feature. Do give it a few spins when you get the chance.

Hurray! There is a competition going between users of our site!
You have to do nothing, but browse out site, and win a daily prize. Click here to read more.
You current ranking:
Time Left: 19h 9m 21s