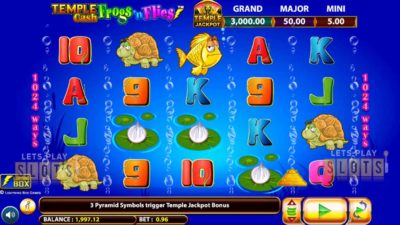 In this game, players are turned into cartoon frogs who are looking to catch some flies. But there’s a catch as the developers have mixed in temple symbols in the reels for that big win. It’s a strange mix but it works in this slot game.

The game features a band of aquatic pond creatures as they try to cash in coins, in their pond. The slot features five reels and 1,024 ways to win.

The developers have relied on using fun cartoony graphics to get players in the mood for the game.

Players will be hoping to get winning combinations from symbols like lily pads, turtles and fish. The frog is the wild symbol that will help with winning combinations. There are also a couple of other symbols that are related to the bonuses of the game. There is the scatter symbol which is the Frogs ‘N Flies logo. The other important symbol is the Temple. These are required for the Temple Jackpot Bonus.

The game features two special bonuses. First, there is the free spins feature. This is what happens when players get the scatter symbol on their winning combination. Players can get anywhere between 5 to 20 free spins. Plus, if players get five scatters, they also get 104.17 times their stake. During these free spins, another wild symbol, the fly, is introduced. Players can also get more free spins by landing the scatters again.

The special temple symbols activate the Temple Jackpot Bonus feature. If players land three of them, the bonus is activated. Players then get to pick from a set of stones to try and progress through a temple. Players need to get a green arrow to get to the next level.

Each success reduces the number of stones while getting red crosses limits your opportunity to win. With three red crosses, the jackpot game ends and players get the rewards they’ve picked up. If players get to the top of the temple, they can get up to £3,000 in prizes.

Overall, this slot game is a pretty basic when compared to some of the other new slots that hit the market. However, players should give it a spin or two and have some fun as the game is very relaxing.

Hurray! There is a competition going between users of our site!
You have to do nothing, but browse out site, and win a daily prize. Click here to read more.
You current ranking:
Time Left: 8h 12m 11s