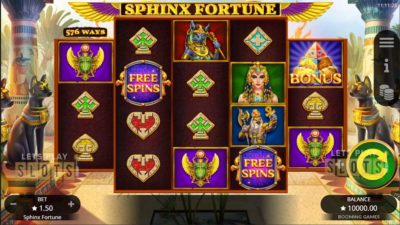 Ancient Egypt continues to be a favorite theme for slot developers around the world. Booming Games is adding to the long list of Egyptian themed slots by releasing their latest game “Sphinx Fortune: Hold and Win“.

Players are taken back to the time of the Pharaohs and presented with a grid flanked by two statues of the Goddess Bastet. The developer has done a great job with the graphics and the soundtrack that brings the theme to life.

The game presents players with an interesting grid. While there are five reels, there are a different number of symbols in each reel. The first and last three reels only have three symbols, while the three middle reels have four symbols. There are 576 ways to win so players have a decent chance to win.

Player bets are a bit limited though. They start at $0.10 which is pretty reasonable but the maximum is restricted to $50. High rollers will likely skip the game because of the maximum limit.

As for symbols, the game has a decent mix. The playing card suits are the lowest-paying ones and are customized for the Egyptian setting. The game also has thematic symbols which include Egyptian gods and famous figures such as Horus, Pharaoh and Cleopatra. The most valuable normal symbol is Cleopatra which has a payout of 5x when there are five of her on the payline.

The game has a Wild symbol in the form of the Pharaoh which makes winning the big prizes much easier. Several special features make it even more special. For one, there is a chance of a big version of the wild symbol showing up in the three middle reels. The size can make it stop when it is not fully visible. This is where the Nudging Wild feature comes in. Players will see the game nudge the symbol into position so that it is fully visible. Every nudge provides a multiplier. The game also has a scatter symbol that triggers free spins.

Players will also want to look out for the pyramid symbols. They appear on the first and last reels of the game. When they appear at the same time, it activates the Hold and Win Bonus. Players then get three respins where they have a chance to score coin symbols. They stay in place when they land and whenever a new coin appears, the respins are reset.

The bonus round is over when no more coins are landed or the grid is full. The game then rewards the total jackpot on the screen, especially with a multiplier from the Wheel of Fortune at the end. The game has an average RPT of 95.32 percent.

Hurray! There is a competition going between users of our site!
You have to do nothing, but browse out site, and win a daily prize. Click here to read more.
You current ranking:
Time Left: 5h 23m 1s