Trek Into the Jungle With Pariplay’s “Treasure Temple” Slot

Trek Into the Jungle With Pariplay’s “Treasure Temple” Slot 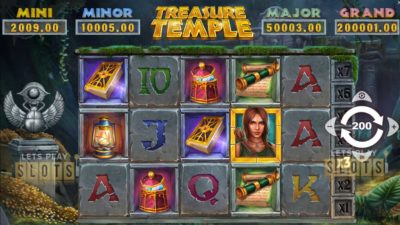 Some of the densest jungles in the world have a reputation of being filled with treasure and mystery.

Pariplay has decided to use a jungle theme for its latest slot called “Treasure Temple” which takes players on a treasure hunt that aims to unearth some of these buried treasures. Players who are fans of the treasure theme will love playing this game.

When players start this game up, they will see an abandoned jungle temple which serves as the setting.

With two statues flanking the reels and plenty of gold, players are encouraged to try their luck. The game features five reels and 243 ways to win.

Just like all new slot games, the game requires players to get winning combinations. For this game, the main symbols are the A to 10 card symbols. They are pretty low value but they are the most common. The more valuable symbols include scrolls, maps and lamps, boxes with diamonds and treasure books.

The most valuable among them is the box with diamonds. Players who get five of it in a winning combination will get 10 times their stake. There is also the scarab beetle that acts as the wild symbol and replaces all high value symbols.

The game does have some interesting special features to make things more exciting. For example, when winning combinations happen, players will see them disappear from screen and new symbols drop down. Called the Tumbling Tiles feature, this continues as long as players get a winning combination on every tumble. Apart from this, every tumble increases the win multiplier by one, with a maximum of 7x.

Players can also trigger the Temple Free Spins feature. This is done by scoring three female adventurer scatters on the same spin. Players then receive 10 free spins with the Tumbling Tiles Feature active. Besides that, the multiplier is doubled. The first win will already have a double multiplier, too.

Players can also have a chance at the Treasure Jackpot Wheel feature. This happens when players land a scarab beetle wild. A multi-ringed stone wheel appears and then spins. Players need to collect the gems on the wheel. Getting three of the same color will give them a prize. The biggest win is 1,000 times their stake.

Overall, this game is pretty simple and easy to play. The real draw is how volatile the game is, with a high potential for winning a big jackpot.

Hurray! There is a competition going between users of our site!
You have to do nothing, but browse out site, and win a daily prize. Click here to read more.
You current ranking:
Time Left: 4h 11m 2s
Gambling is for 18+ though some countries may have other restrictions...Remember you should always Gamble Responsibly
We use cookies to ensure that we give you the best experience on our website. If you continue to use this site you agree to allow us to use cookies, in accordance with our Terms & Conditions.Agree & Close