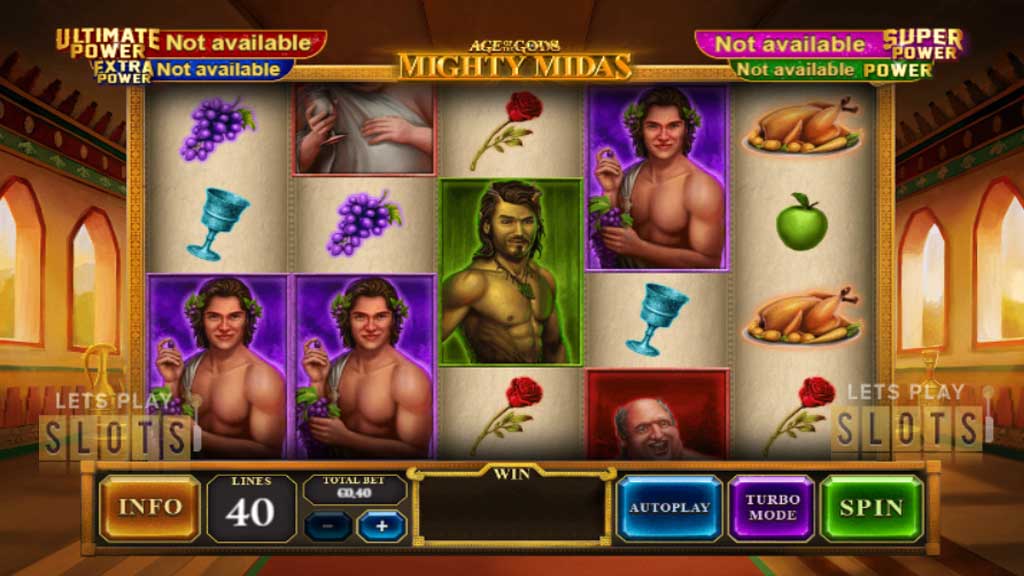 Turn Everything Into Gold With The Age of the Gods: Mighty Midas

The Age of the Gods slot game series from Playtech has received a pretty good market response and has given the casino game developer a wide enough field to play with various themes.

Their latest offering for players who want to experience ancient mythology through their slot games is Mighty Midas.

This new slot is based on the myth of Midas, who turns everything into gold. That’s what players are hoping to also do when they play this new slot game.

The Age of the Gods: Mighty Midas slot game features five reels and 40 pay lines. That’s a lot of potential wins when it comes to the basic game.

The game looks great with a lot of unique graphics and a nice theme. Players should have a great gaming experience while they get into the Midas party.

For symbols, the low-paying ones are goblets, grapes and other party favours. For the more valuable symbols, there are various mythological figures. This includes the gods Dionyssus, Marigold and Lityerses. The most valuable symbol of the game though is the King Midas symbol. It gives players 12.5 times their original stake.

The game also has fun bonus features that are activated by the scatter symbol, which is a mix of five gems. Players who score this symbol will be able to get a chance to spin a reel and choose which gem bonus game is activated.

The Emerald Bonus reveals a random multiplier. The Amber bonus gives players five free spins with additional wilds. The Ruby bonus will get seven free spins and resets the Golden Wild multiplier and increasing the potential to 30 times the original stake. The Amethyst bonus will get three free spins but Midas Touch symbols are double.

Overall, players have a nice chance to score the jackpot when they play the Mighty Midas slot game.

Hurray! There is a competition going between users of our site!
You have to do nothing, but browse out site, and win a daily prize. Click here to read more.
You current ranking:
Time Left: 5h 41m 35s