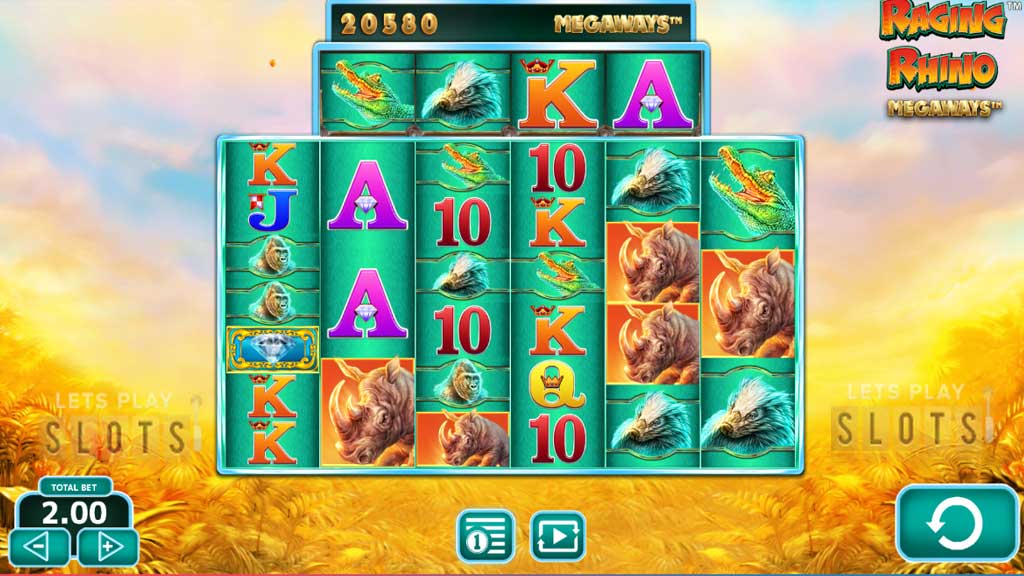 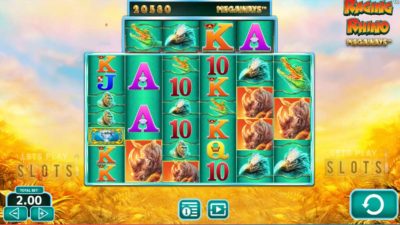 “Raging Rhino” is one of the classic slot games that WMS created. Players have had a lot of fun with it through the years and now the game is getting a new version. Players will be treated to a big change as WMS has partnered with Big Time Gaming to bring Raging Rhino to the MegaWays engine. Players will get to experience 117,649 ways to win with its six reels.

The game is set in the wide African grasslands where rhinos roam freely along with some of the other magnificent wild animals. The goal is the same as any other slot game: get winning combinations of symbols. The game has several low-value symbols. These are the A, K, Q, J, 10 and 9 royals.

The game also has animal symbols which serve as the high-value symbols. They are badgers, cheetahs, crocodiles, and gorillas. The most valuable symbol though is the rhino. Players who get six of it on their winning combination will get 25 times their stake. Besides this, the game also features a wild symbol. These substitutes for all symbols except for the diamond bonus symbol. It usually appears only on the top row which is above the main reel set.

Because of the MegaWays engine, the game has a differing number of symbols per reel. They can range from two to seven. There is also the top reel which has four rows and acts as an extra row for the four middle reels.

The game also has an interesting set of bonus features. There is the Cascading Reels feature. Players who get a winning combination will see those symbols explode and have new symbols replace them. There is a chance that a new winning combination is formed from this so it can lead to constant cascades until all are done.

Another cool feature is that of the Free Spins feature. This happens when four or more diamond bonus symbols are scored. Players will get a minimum of eight free spins and getting three more diamonds during these spins will net you another eight.

Every win during these free spins also has multipliers, so a win during the bonus game is bigger. There is also the Bonus Guarantee feature. Players who win less than ten times their total stake, have it bumped up which can be often ten times their stake. Overall, this is a fun little game and is a worthy successor to the Raging Rhino name.

Hurray! There is a competition going between users of our site!
You have to do nothing, but browse out site, and win a daily prize. Click here to read more.
You current ranking:
Time Left: 4h 57m 35s