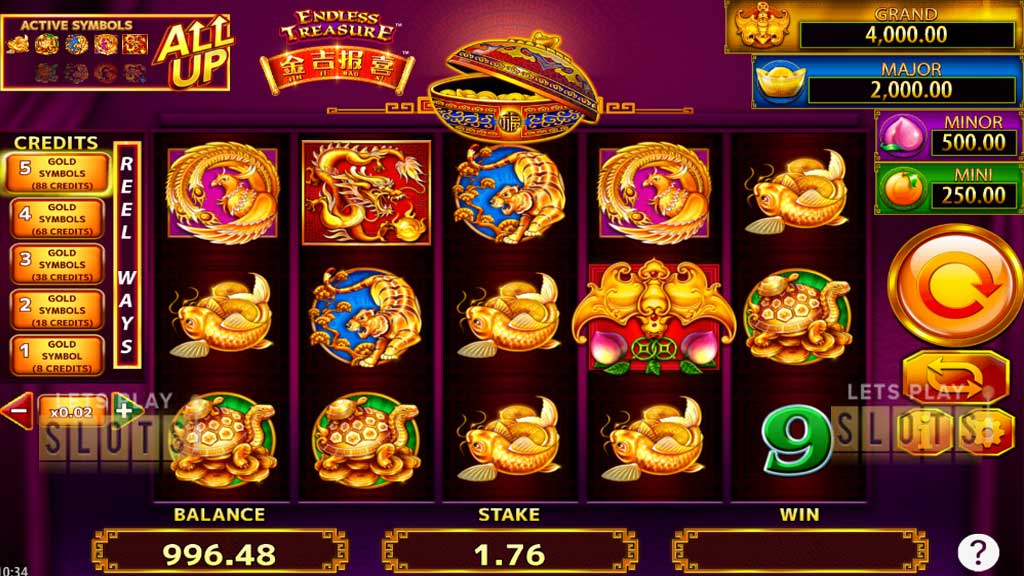 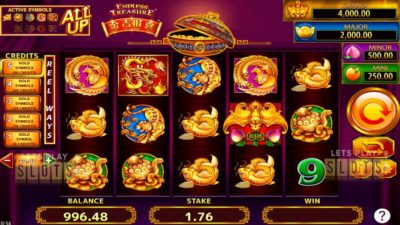 Chinese-themed slots are becoming more popular with every passing year. WMS has launched a new Chinese themed slot called “Jin Ji Bao Xi: Endless Treasure“. This game takes players on a treasure hunt and allows them to play with the golden treasures of the Orient. Featuring five reels and 253 ways to win, this game should be very popular with Asian players.

The game has a rather simple presentation. Players will be welcomed to the sight of the five reels with a dark purple background. The other colour that dominates the screen is gold, with most of the symbols also being in the same colour. The music is a catchy oriental tone that will get players into the treasure hunt mood. The screen has everything that a player needs to know to get started in the game.

The game features the traditional card symbols as its low-value symbols. For the more valuable symbols, it uses creatures from Chinese folklore. This includes turtles, tigers, the Phoenix, the dragon, and the koi carp. All of them have the same high payout of 20 coins, if players manage get five in one payline. The game also has a wild symbol that will act like all the other symbols except for the bonus symbol.

Most players will immediately notice that there is a meter at the side of the reels. It goes from one to five. This is the unique gameplay feature. Players set the level of how many gold symbols they want to be in play for each spin. At the max, five of the animal symbols will show up in gold which means that they will have higher payouts but at the same time will require players to spend more.

The real draw of this game is the bonuses. One of them is called the Golden Chance feature. When a wild symbol lands on the middle reel, it randomly turns standard animal symbols into gold. Players will also get a 2x multiplier if they win.

Players can get free spins when six or more bonus symbols appear in the same spin. Players get six free spins and the chance to win the Fu Value pot. This game should be a fun enough diversion with its Chinese theme and fun bonuses when it arrives at their favourite online casino.

Hurray! There is a competition going between users of our site!
You have to do nothing, but browse out site, and win a daily prize. Click here to read more.
You current ranking:
Time Left: 12h 21m 22s
Gambling is for 18+ though some countries may have other restrictions...Remember you should always Gamble Responsibly
We use cookies to ensure that we give you the best experience on our website. If you continue to use this site you agree to allow us to use cookies, in accordance with our Terms & Conditions.Agree & Close