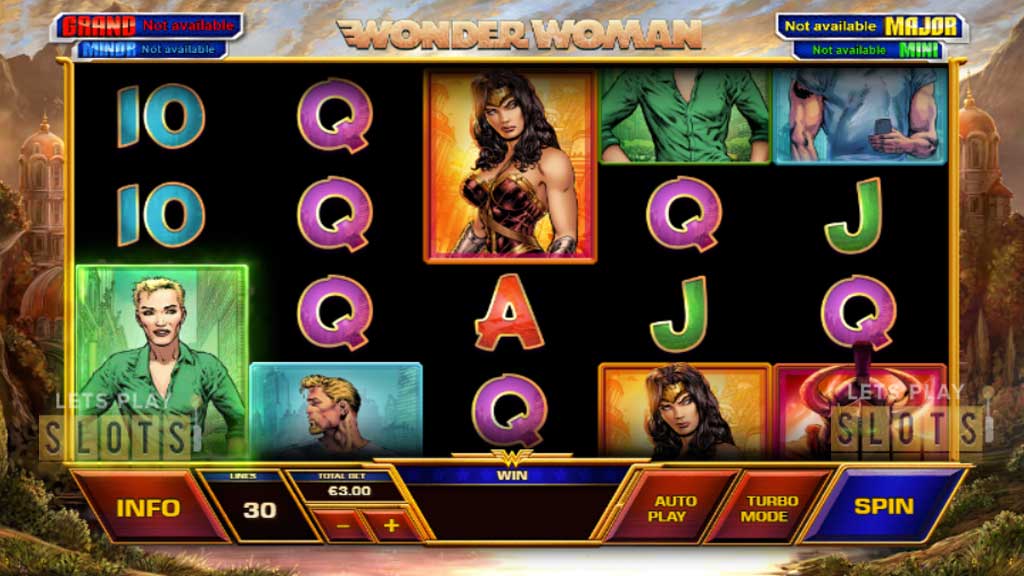 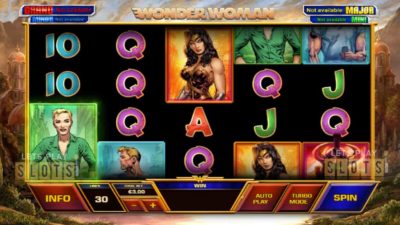 Playtech continues its work on DC Super Heroes with its latest offering, Wonder Woman. The previous slot from the company was the very impressive Aquaman. This new slot once again sees the top casino software developer bring its A-game once again to make this excellent slot game adaptation. Featuring art from the comic books, this slot game is playable on multiple platforms and has five reels and 30 paylines.

When players start this game, they are greeted by Wonder Woman in an introduction to the game. Players get a short overview of how to win in the game and what to aim for. The game features a battle between Wonder Woman and one of her arch-enemies, Cheetah, as they struggle on legendary Paradise Island.

The slot game mechanics stay the same: players need to line up three of the same symbol to score a win. There are two levels of symbols available. The low-value symbols are the card symbols. The higher value symbols are the characters from the comics. The most valuable one is Cheetah herself. If a player gets five of her on the payline, the player will be able to get 75x their original stake.

Wonder Woman appears in the game as the wild symbol. Since the game features stacked symbols, Wonder Woman can be present in multiple rows. As a wild, the super heroine acts like all the other symbols except for the scatter symbol.

Go for the Jackpot

The game also activates the Cheetah feature when Barbara Ann symbols appear on reels one and five. This converts all high-value symbols in the three middle reels into the Cheetah symbol for this spin.

There is also the scatter symbol which features both Wonder Woman and Cheetah. If the scatter appears in both reel one and five, then players will be able to get free spins with various bonuses. We must also point out that this game is on the DC Super Heroes Jackpot network. Players have a random chance to get access to the progressive jackpot game.

Hurray! There is a competition going between users of our site!
You have to do nothing, but browse out site, and win a daily prize. Click here to read more.
You current ranking:
Time Left: 6h 9m 40s
Gambling is for 18+ though some countries may have other restrictions...Remember you should always Gamble Responsibly
We use cookies to ensure that we give you the best experience on our website. If you continue to use this site you agree to allow us to use cookies, in accordance with our Terms & Conditions.Agree & Close