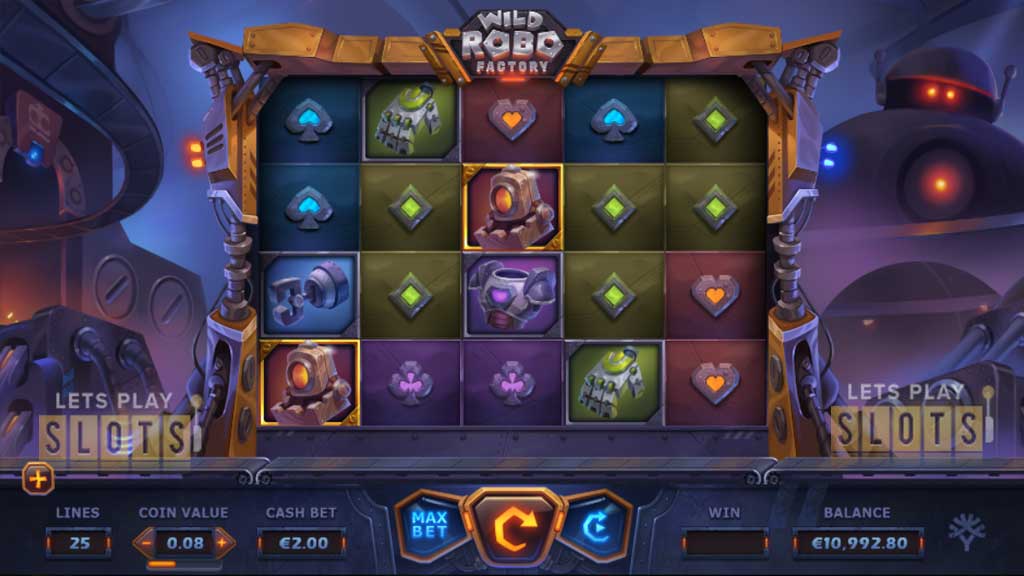 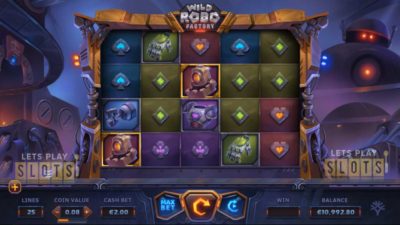 There is more interest in robots and in the sci-fi genre than ever before. Yggdrasil Gaming has decided to use this strong interest to its advantage by coming out with a new slot called “Wild Robo Factory“.

In this game, evil robots force other robots to work too much. Players will have the task of rescuing these robots and setting them free. For players, the goal is to get winning combinations and hit the game’s big bonuses.

When players start this game up, they will be greeted by some of Yggdrasil Gaming’s best work. The graphics are very good, with the factory backdrop and the music getting players in the mood. The symbols on the reels are really cool and make things interesting.

As for gameplay, the slot features five reels and 25 paylines. There are eight basic symbols in this game. Four of them are the hearts, clubs, spades and diamonds. There are four different robot servants. Each of them matches a colour of one of the lower-value symbols.

The real star of the game is the Robo Wild. This is the wild symbol and it can show up as a single symbol or a double wild. It is either stacked on one reel or spread out to two reels. The fun thing about the wild is that it will stay on the reels and move one position left with each spin. This means players have better chances of winning.

The wild is just one part of what makes the game great. It also features some nice bonuses. One of them is the Robo Respin feature. This can be randomly triggered and results in free respins. Players also have a chance at the Robo Free Spins feature. This is triggered when three or more free spin symbols are scored.

Besides this, the conveyor belt can randomly reverse directions. This means the Robo Wilds can stay longer on the reels. This is the System Overload feature. Another bonus is the Symbol Swap feature. This happens when one of the card symbols is changed to a higher value symbol to become part of a winning combination.

Overall, the game is fun and looks great. Players should try it out if they like the sci-fi theme and are fans of Yggdrasil Gaming.

Hurray! There is a competition going between users of our site!
You have to do nothing, but browse out site, and win a daily prize. Click here to read more.
You current ranking:
Time Left: 6h 19m 46s