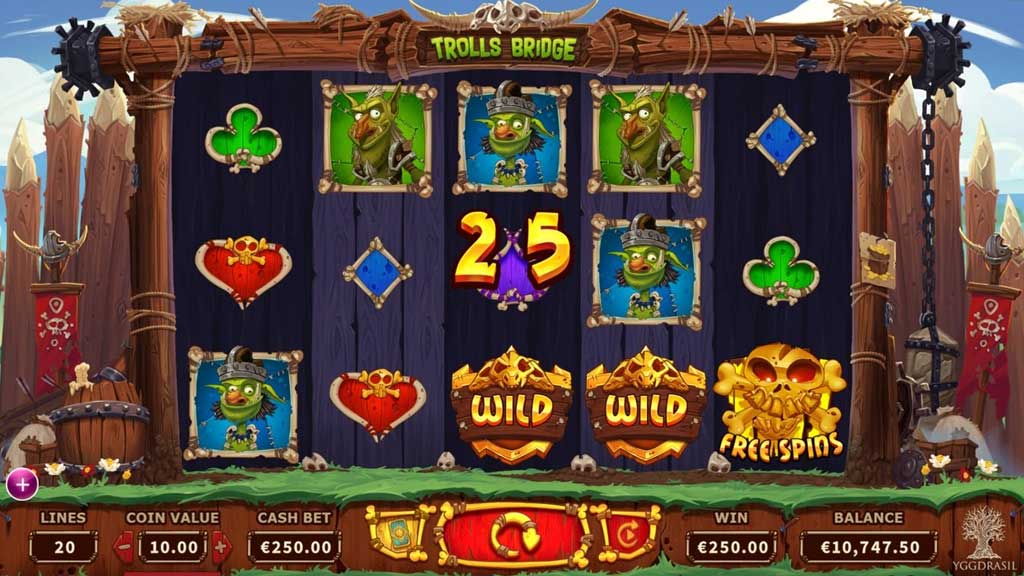 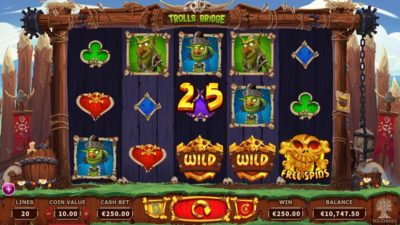 Yggdrasil Gaming is coming out with a new slot game that will be sure to entertain a lot of players.

“Trolls Bridge” is a fantasy slot game that features a funny bunch of trolls as they try to hinder the players from crossing their bridge. This new slot has some great gameplay and will be sure to keep a lot of players happy.

The slot was expected to be released on the 9th of Jan 2019 but it looks like Yggdrasil has decided to give its loyal followers an early Christmas present.

The Trolls Bridge welcomes the players with an image of the trolls blocking off a bridge.

The art style is very reminiscent of World of Warcraft. It looks good and is pretty appropriate for the game. The game keeps getting better as players get into the action and start to experience the special effects which come into play as they score big or get the chance at the bonus game.

The game starts off as a basic five-reel slot game. There are 20 pay lines so there is a decent chance that players will be able to score a winning combination. They just need to line up at least three of one symbol starting from the left of the screen.

The low-paying symbols are the basic card symbols, but for the higher scores, players will need to get one of the four trolls of the bridge. There is also the wild symbol that acts as other symbols for scoring. For players who want to win big, they can opt to use the Golden Bet feature, which ups their stake by 25 percent – but will raise their chances of winning too.

However, the real prizewinning feature of Trolls Bridge is the Bonus Pot. It only appears on the fifth reel but when a player scores it, they will be treated to the game's bonus feature. The result is random but at the very least players will get 40 to 1,000 coins. Lucky players will get to access free spins with several bonuses.

If a player does get free spins, the bridge goes down and they are given a chance to select a random set of bonuses for their spins. This can range from additional wilds to turning normal symbols into wild symbols. The number of free spins can change, too. Players can get at least six free spins though the maximum is ten. You can find this new release at online casinos that support Yggdrasil.

This online slot can also be played on the go as it is compatible with both Android and iOS devices.

Hurray! There is a competition going between users of our site!
You have to do nothing, but browse out site, and win a daily prize. Click here to read more.
You current ranking:
Time Left: 15h 47m 12s