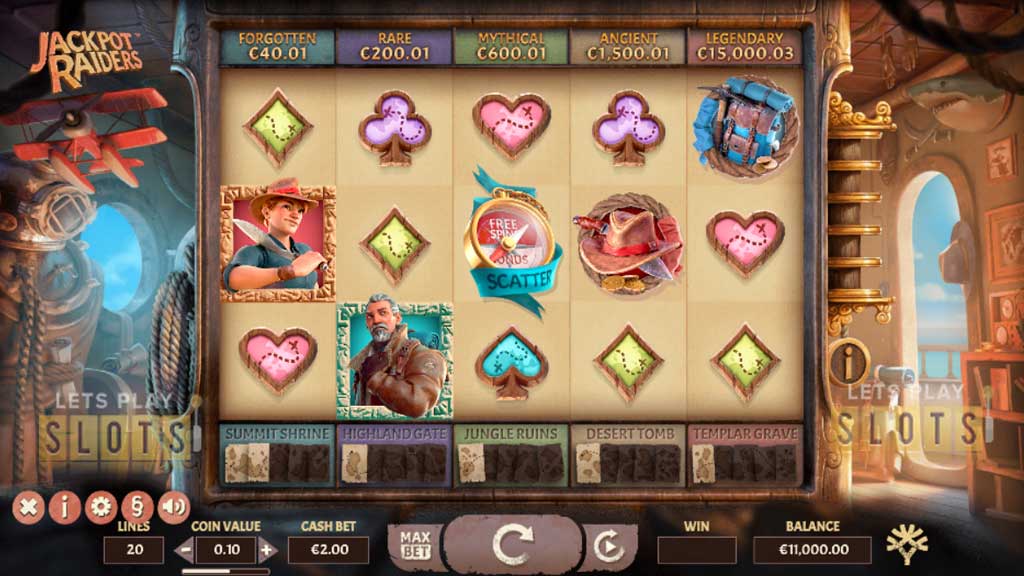 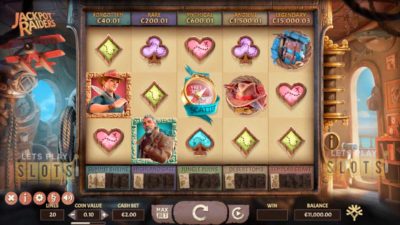 Treasure hunting has always been a popular theme with slot developers as slot lovers are trying to accomplish a similar feat by winning the jackpot and getting rich.

Yggdrasil Gaming has a new slot called ‘Jackpot Raiders‘ where players will be helping out Sam and Bear as they go about looking for treasure in the Sunken City.

The inspiration for the game is definitely Indiana Jones and it is very noticeable. Players will start this game from a ship’s cabin. The game features five reels and 20 paylines.

Players will be trying to score winning combinations and the limited paylines can be a bit of a challenge.

The lower-value symbols available are hearts, diamonds, clubs and spades. Though they yield a good value, the higher-value symbols that include Sam, Bear, hat and backpacks give out bigger amounts of money. Scoring Sam will be the most rewarding, with five of the explorer giving winners 200 times their stake. A surprising change that players will miss is that there are no wilds for this game.

With no wilds, the game makes up for it with several features. First, there is the Compass feature. This is triggered when three or more scatter symbols are landed. Players can also activate it with the Pick & Click Chest feature. Scatters also give additional rewards. With three scatters, players will only get the compass. Four scatters give the compass and a 50 times multiplier. Five scatters will give 500 times a player’s stake.

The Compass feature gives players either 10 Jackpot Free Spins or entry to the Treasure Hunt Bonus feature. Players who get free spins will get a 3x multiplier and chances to get gems during the spins.

Besides the free spins, two scatter symbols will give access to the Pick & Click Chest feature. Players have a chance to pick either a small multiplier, 10 free spins, an Entry to the Treasure Hunt Bonus feature, or one random Map towards your Map collection.

Players who collect all five maps will get ten Jackpot free spins with one starting gem towards that reel’s Jackpot collection. A complete jewel collection of the same type will reward players with jackpots that correspond to the color of the gem. This can reach up to £15,000.

The Treasure Hunt Bonus feature is activated by the compass or the Pick & Click Chest. Players have to choose between playing either as Sam or Bear. Sam will yield better prizes but has lower chances of success, while Bear has an easier chance of winning but has lower prizes. Once selected, players will then try to cross a river to open a chest.

Overall, the many bonuses are the main attraction for this game and makes it a lot of fun to play!

Hurray! There is a competition going between users of our site!
You have to do nothing, but browse out site, and win a daily prize. Click here to read more.
You current ranking:
Time Left: 5h 53m 49s