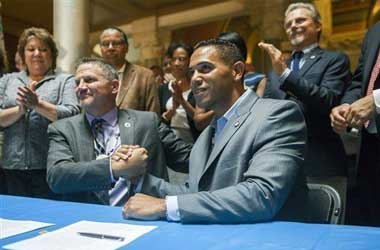 The two Native American tribes proposing to build a satellite casino have taken steps to reassure Connecticut’s legislators that slot revenue from their existing casinos would not be in jeopardy.

The Mashantucket Pequots and Mohegans tribes who operate the Foxwoods and Mohegan Sun casinos have guaranteed that the gaming tax from their casino slot revenue which is expected to be in the range of $267 million this year, would not be impacted and would continue to go to the state.

The reassurance came after a legislative measure that would approve the development of a third casino jointly by the two tribes stalled amidst legal concerns. State Attorney General George Jepsen has issued a warning that the state might lose out on slot revenue if another gaming facility offered slots, even if it is run by the tribes themselves as it would violate the current compact.

Opposition has also come from other operators who have demanded that bidding be made open to all. The third casino has been proposed by the tribes as a measure to protect the state’s gaming revenue and jobs from the upcoming $950 million MGM Springfield casino in nearby Massachusetts.

The possibility of revenue loss is a sensitive issue as the state faces a worsening budget deficit situation. Legislative leaders have emphasized that they do not want of risk any existing revenue streams. The tribes have sought to remove any fear that legislators might have by referring to a letter from the federal Bureau of Indian Affairs (BIA) stating that there were no objections to amending the existing compact to allow a third casino. Formal approval of their application is however pending.

Addressing a news conference, Rodney Butler who heads the Mashantucket Pequot Tribal Nation and Kevin Brown who chairs the Mohegan Tribe said that they were confident that the BIA would approve the changes. Legislative leaders welcomed the tribes’ assurances but were still doubtful of the gambling expansion getting cleared in the current legislative session, pointing out a number of other issues.

House Majority Leader Matt Ritter said that while the revenue issue was important, there were still possibilities of court challenges. Lawsuits could also be filed by other operators for having been excluded from the license issuance process. House Speaker Joe Aresimowicz has said that he wasn’t sure how much the assurances from the tribal leaders would help the proposal’s passage, adding that the chances of it being cleared were still at 50-50 percent.

Hurray! There is a competition going between users of our site!
You have to do nothing, but browse out site, and win a daily prize. Click here to read more.
You current ranking:
Time Left: 2h 6m 35s