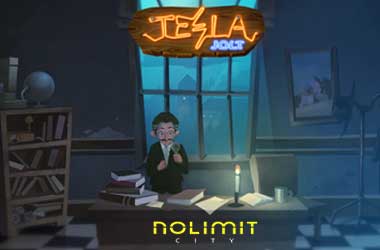 A new and fun video slot called ‘Tesla Jolt’ has just been released which is inspired by the life and work of Serbian-American inventor Nikola Tesla.

Developed by online casino platform and game developer NoLimit City, Tesla Jolt is a slot title with five by three reels and 20 bet lines, made much more exciting with the addition of bonuses and power-ups.

The video slot takes place right at the lab of the 20th century genius Nikola Tesla, whose contributions to the design of the modern electricity supply system sets the mood and the tone of the game.

Learning the different power-ups are simple and straight forward as they are mostly based on the Tesla theme. There are free spins, ample wilds, and different kinds of opportunities to win via the different boosters.

Tesla Jolt is activated when it lands on reel 5. It triggers a random set of symbols to become Wild for a nice win. Tesla Spins are awarded by 10s, 15s, or 20s when there are three or more scattered portraits on the bet lines. You can also charge Wilds on reels 2, 3, and 4, with the Time Lapse Trigger. It basically stores Wilds and releases it on reel 5 when you get enough Wilds for bigger wins.

NoLimit City To Come Up With More Titles In 2018

In a statement, Per Lindheimer, product owner at NoLimit City, said

Nikola Tesla is a fascinating historic figure and it’s been an absolute blast to create this visually stunning game inspired by this man. Working with lightning effects, exploding features and this type of setting makes a great starting point for any slot. I’m sure the features in this game will jolt your heart rate in the best of ways!

The low volatility slot title is developed in HTML5 and is available for play via desktop PC, iOS, and Android phones. It has a wagering range of $0.20 to $100, an average RTP of more than 96 percent, and a hit frequency of around 32 percent.

Tesla Jolt is NoLimit City’s eighth title and is available to all NoLimit City partners. Building on the momentum of Tesla Jolt, the gaming developer is bullish that they will roll out more titles throughout 2018.

Hurray! There is a competition going between users of our site!
You have to do nothing, but browse out site, and win a daily prize. Click here to read more.
You current ranking:
Time Left: 21h 33m 49s