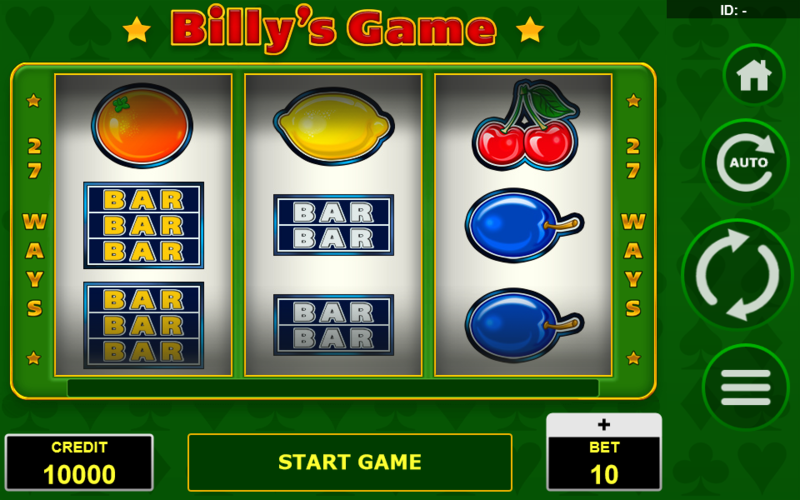 Billy’s Game is a modern three-reel slot by Amanet, spin those reels with Bars and 7s, and if you land a full board win your prize will be doubled! 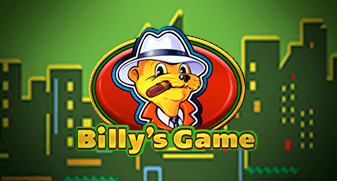 I’m into three-reel slots recently and have therefore played Billy’s Game for a while, so here’s what I think about it. This is a classic three-reel slot machine by Amanet, which is the online department of a well-known slot machine developer Amatic. Billy’s Game was released in 2014 and is one of the most modern three-reel slots out there. Graphics are done in high resolution and the familiar symbols all look great on the reels. Also, the slot machine is optimized for mobile play so it can be played on any device.

Theoretical return to player (RTP) is 96.00%, which is very good for a three-reel slot as there are a lot of them that offer very poor payout values. Also, as all players of such slots will already know, the good thing about three-reel slots is that the entire payout is right there in the main game, on those three reels. There aren’t any jackpots, progressive prizes, free spins, bonus rounds that need to be triggered first, and in Billy’s Game what you see is what you get. Land nine same symbols on the board and you win a hefty sum. Simplicity is good in this case. As with most three-reel slots, Billy’s Game has high variance, and that’s I expected from this type of slot anyway. It wouldn’t be that good if variance was low or medium. 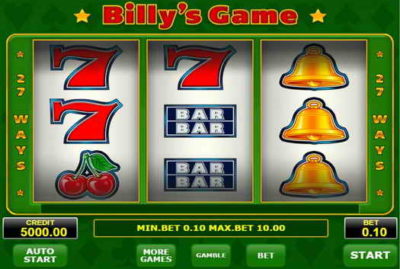 There are three reels in Billy’s Game, three rows high, and the game uses 27 paylines on this 3×3 board. That’s the maximum possible number of paylines in this setup so there’s no chance you’ll miss a win if you land three of the same symbol on each of the three reels. You’ll win every time that happens, unlike with those games that only offer nine or five paylines. It costs 10 coins to play those 27 paylines, and the maximum bet is 1000 coins.

Four fruit symbols represent the low-value portion of the paytable, and all of them pay the same, 5 coins for three-of-a-kind, which means you will only get half of your stake back with these symbols. Bar, Bells and 7s are the three main symbols in this game, and 7s really pay a decent prize of 100 coins, which is 10x your bet. If you’d happen to land a full set of 7s on all nine positions, you wouldn’t get 270x your bet but 540x your bet as the prize is doubled, and that’s just a superb proposition. It is valid for all symbols – whenever you land a full board win the prize will be doubled. Symbols can appear stacked on a single reel often, helping you get that prize. There is a Billy Wild symbol that substitutes for all other symbols, and if you land three Wilds you’ll get 150 coins. 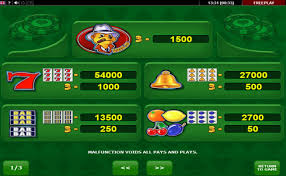 There are no bonus features in Billy’s Game, except for the fact that a full board win is doubled. But even that alone means a lot for the profitability of this slot, even if it doesn’t give the player a bonus feature as such. Experienced players will know how to appreciate this type of slot machine, and I certainly liked how it plays and how it pays.

As far as three-reel slots go, Billy’s Game is a good choice. Those players who are looking for three-reel slots to play will be happy with the payout of this slot as well as the doubled prizes for full board wins, and the graphics are very nice too. While the same old symbols are used, they are nicely drawn so you get both the sense of familiarity and a sense of seeing something new. All players who like this type of slot machine will love Billy’s Game. Billy is becoming sort of a prominent character for Amanet, as three years after this slot they’ve released a popular and critically acclaimed five-reel classic slot Billyonaire.

Billy’s Game is a modern three-reel slot by Amanet, spin those reels with Bars and 7s, and if you land a full board win your prize will be doubled!

Hurray! There is a competition going between users of our site!
You have to do nothing, but browse out site, and win a daily prize. Click here to read more.
You current ranking:
Time Left: 1h 37m 10s