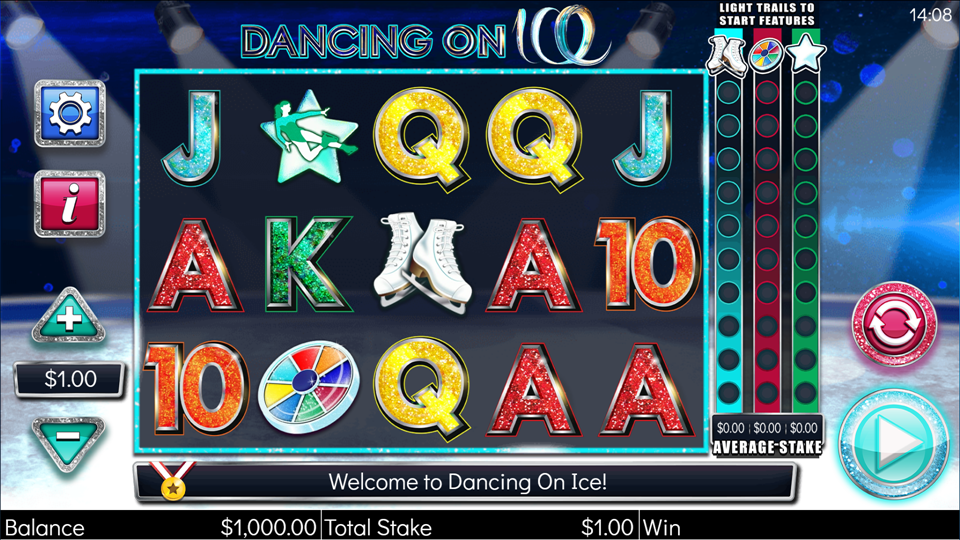 Dancing on Ice is a slot game by Storm Gaming that’s packed with bonus features, progress bars and Wilds, and is a very fun slot to play. This ice skating themed game was released in 2018.

Best Casinos to Play Dancing on Ice for Real Money : 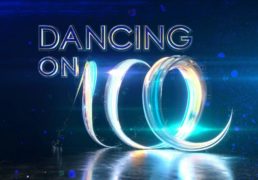 Dancing on Ice is one of the rare slot games that chose the theme of ice skating, but you don’t necessarily need to be a fan. I’m not, yet I enjoyed this slot game because of the many bonus features it has, and the clever game mechanics, which I’ll describe in more detail so you can choose if you wish to play Dancing on Ice or not.

The game is played on a 5×3 board with 20 fixed paylines, and you pay from €0.20 to €20 to play these paylines. The paytable consists of nine normal symbols, plus a Wild and two Scatters, for a total of twelve symbols.

The three main symbols are Skates, Wheel and Star, and these will pay from 6x your bet to 12.50x your bet for five-of-a-kind, and will also be responsible for filling the respective progress bar in case the symbol lands with a colored background. The five card symbols don’t pay bad in comparison, as the prizes are 3x or 4x for five-of-a-kind, and the Dancing on Ice symbol is the best one in the game as it can pay 25x your bet. In case of four high-win symbols, you can also make money with four-of-a-kind, as the prizes range from 2x to 10x.

Randomly, a Skater may appear on the reel, and in that case the entire reel will turn Wild. There is also a Medal that can bring you win multipliers up to x9. 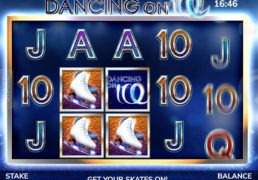 There are three trails on the right, each with 10 sections, and you fill those three progress bars by landing the respective symbol on the board – Skates, Wheel or Star. When you complete a trail you’ll trigger the associated feature, and the best thing that can happen in this game is if you complete all three trails on the same spin, in which case you’ll get a huge cash prize on top.

Judges Choice game gives you four judges to choose from, and you’ll reveal win multipliers. Cash Wheel will give you a win multiplier. Star Moves will let you pick one ice skater, and his performance will either please the judges and increase your multiplier, or the judges won’t like it and the feature will end. All those three features simply award a cash prize.

When you land two Spinning 7 symbols on reels 2 and 4, the Spinning 7s feature is activated. You’ll first pick one of three options to reveal the number of free spins, and will then get to play a mini game with a 3×3 board that has only 7s of different colors on it.

This game is let down by the poor theoretical return to player (RTP), which is only 94.43%, so that means that while this game is absolutely packed with features, it amounts to little. The game will provide a lot of fun but not so much cash, unless you trigger the bonus features often or unless you land some nice five-of-a-kind wins. But there are many ways in which this game can pay a good win, so there’s a decent chance of making money on Dancing on Ice. It’s a fun game to play, too, so you might want to try it out just to see all those bonus features in action. It’s also nice to have those three progress bars, so you can time the end of your playing session right after you trigger the three respective features.

Dancing on Ice is a slot game by Storm Gaming that’s packed with bonus features, progress bars and Wilds, and is a very fun slot to play. This ice skating themed game was released in 2018.

Hurray! There is a competition going between users of our site!
You have to do nothing, but browse out site, and win a daily prize. Click here to read more.
You current ranking:
Time Left: 14h 2m 26s