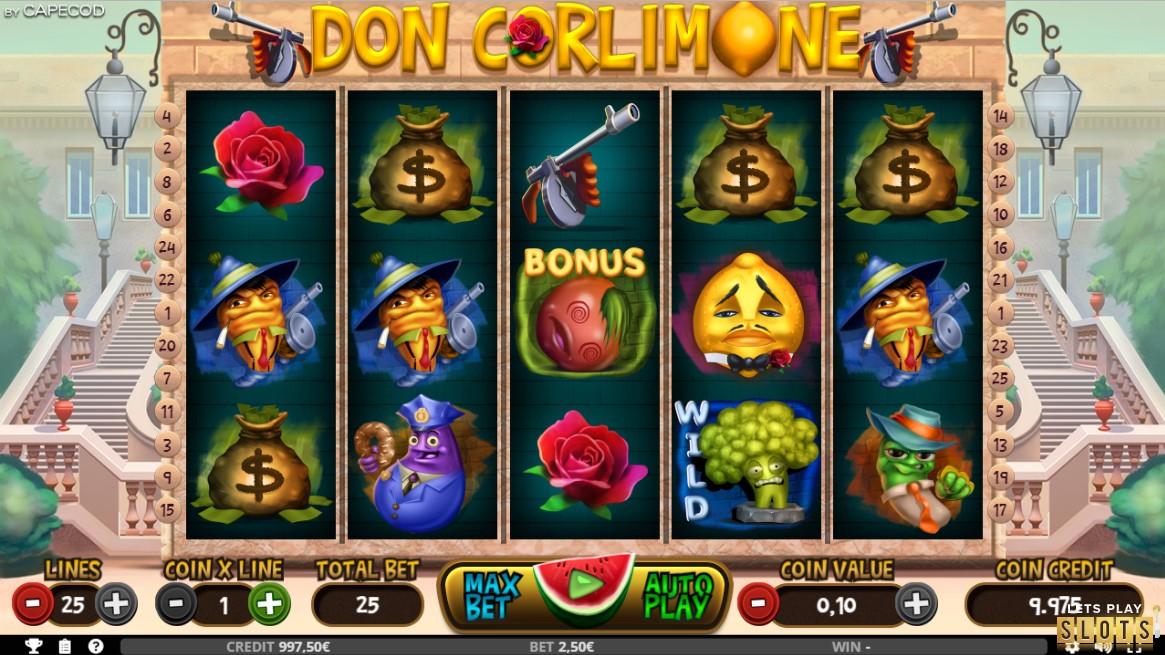 Don Corlimone runs this town with his mobster fruit and vegetable friends, so you’d better not think about crossing him. Make sure that you watch out for the broccoli Wild, the bonus Freespin round, the bonus Tomato and the bonus Magicspin in this one.

You know those moments when you access an online slot and you instantly know that you’re going to enjoy it? Well, that’s the exact feeling that I had when I loaded the Don Corlimone slot up by Capecod Gaming. And my feelings weren’t wrong either, because I thoroughly enjoyed spinning the reels of the game and watching everything unfold. It helps that the game has a great and fun theme behind it, with this one taking the idea of the mafia and turning them into fruits. 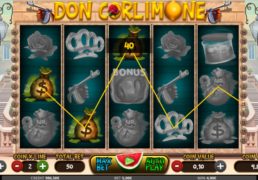 The layout of this game isn’t specifically unique, as it utilises five reels and three rows, which is quite normal for slot offerings. Across this setup, you’ll be able to place bets on a total of 25 pay lines. However, you can customise the number of active lines with the relevant button at the bottom of the reels. You’re also easily able to adjust the value of the bet that you place on these lines, first of all by choosing a coin value between €0.01 and €0.10. You can then alter the number of coins in action per line between one and 10. This means that the maximum wager that you can place on Don Corlimone stands at €25 per spin.

On the visual side of things, Don Corlimone is set against a backdrop of the mafia boss’s ornate home. Upon the reels, you’ll get to see symbols of a rose, a cigar and whisky, a tommy gun, a bag of money and some knuckledusters. The latter two of these can pay out up to 250 times your stake. The higher-paying symbols are of the aubergine, pea pod, parsnip and, of course, Don Corlimone himself. 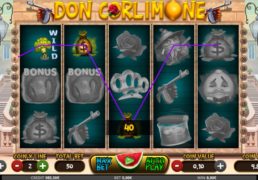 I do enjoy seeing the strange design of the broccoli that exists in this slot as its wild symbol. This means that the symbol will stand in for all other standard icons on the reels, helping you to create winning combinations.

There’s also the symbol of Don Corlimone behind bars, which works as the game’s freespins symbol. This one can show up in any location, and if three or more do come into view anywhere, you’ll trigger the freespins round. There’s up to 20 freespins available to win, and during this round, expanded wild symbols will be in action.

During the freespins round, you’re also able to trigger the Bonus Magicspin function. If three, four or five of the safe symbol come into view during this round, you will receive up to 10 Magicspins as a reward. These work in the same way as freespins, but with bigger cash pay-outs.

Finally, there’s a bonus tomato icon, and you need to spin five of this one into view anywhere to trigger another bonus round. This consists of three attempts, and for each of those you choose which of the two fists will punch the tomato. If you get a hit, you receive a random win and move on to the next attempt. 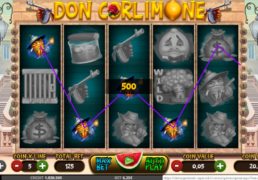 There’s plenty to like about the Don Corlimone slot machine, and I can honestly say that I enjoyed playing it a lot. The graphics are great, the gameplay is entertaining and the special features add together with this to ensure that you have a thoroughly thrilling time spinning its reels.

Don Corlimone runs this town with his mobster fruit and vegetable friends, so you’d better not think about crossing him. Make sure that you watch out for the broccoli Wild, the bonus Freespin round, the bonus Tomato and the bonus Magicspin in this one.

Hurray! There is a competition going between users of our site!
You have to do nothing, but browse out site, and win a daily prize. Click here to read more.
You current ranking:
Time Left: 18h 54m 37s
Gambling is for 18+ though some countries may have other restrictions...Remember you should always Gamble Responsibly
We use cookies to ensure that we give you the best experience on our website. If you continue to use this site you agree to allow us to use cookies, in accordance with our Terms & Conditions.Agree & Close