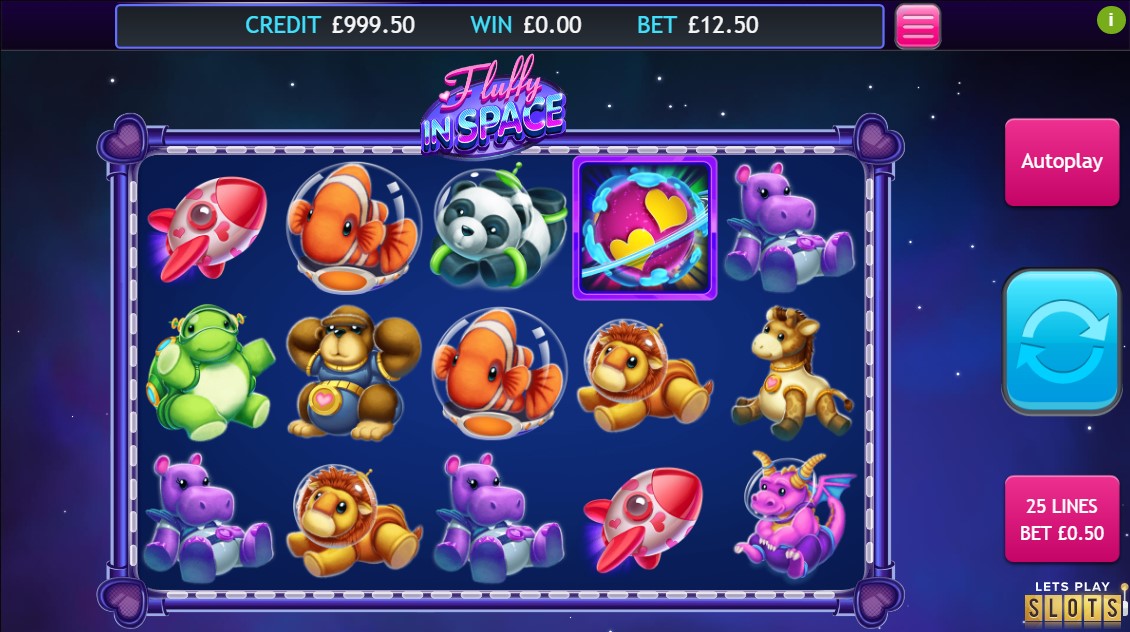 What kind of wonder would it be to see fluffy characters floating through space? Well, now you can, with Fluffy in Space from Eyecon. You’ll get an out-of-this-world experience with Wilds, a Free Spins round and Bonus Feature, too!

Best Casinos to Play Fluffy in Space for Real Money :

If you’re anything like me, then you’ll love playing the Fluffy Favourites slot games from the Eyecon brand. That’s why when I heard about Fluffy in Space being released, I knew it had to be high on my list of slots to play. I wasn’t disappointed either, because this one takes all of the entertaining parts of the Fluffy Favourites slots and makes them even bigger for Fluffy in Space. 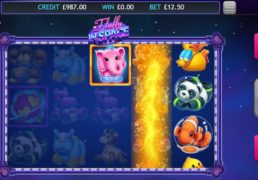 The design of the slot incorporates five reels and three rows for you to play through, whilst also providing you with a total of 25 pay lines to bet on. These lines are not changeable, but you can easily adjust the value of your wager. The game features coin value between €0.01 and €0.50 that you can select from. With this in mind, you’re able to place a maximum overall wager of €12.50 per spin in this slot.

Eyecon has also made sure to keep up its impressive graphics in this slot game, which I was very pleased to see. While the far reaches of space can be seen in the background, the fluffy characters appear on its reels as symbols. These begin with the fish and the duck, which are followed on by the rhino and the giraffe. Each of those can pay out up to €50. There’s also the tortoise and the lion, which reward you with up to €75. A panda is also present on the reels, while a gorilla and a dragon can also be seen. The hippo comes next, while the rocket ship is the highest-paying standard icon, which can pay out up to €200.

A wild symbol can also be seen on the reels of Fluffy in Space. This one will substitute for all of the standard symbols mentioned above, assisting you with forming wins. The wild can only show up on reels two, three, four and five. 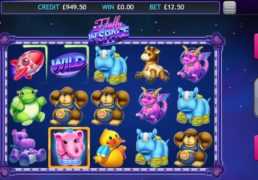 I love the bonus features that can come into action in this slot, starting with the Fluffy in Space Feature. This activates whenever three or more of the Nellie the Elephant scatter symbols come into view across the reels. The bonus round sees the elephant symbols stay in place and all other positions transform into individual reels. Three free spins are then given to you and if additional elephant symbols show up, these also hold in place and the free spins counter returns to three. The feature ends when no additional free spins are available or if 15 Nellie symbols are on the screen.

There’s also a standard scatter symbol, which is that of the planet with love hearts on it. You’ll be given six free spins if three or more of these show up anywhere on the reels. This feature can also be re-triggered up to 50 times while it is in play. 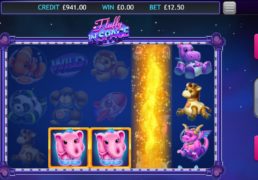 How could you not love a game that features fluffy characters upon its reels? It’s almost impossible. And when you consider that Eyecon has also added such intriguing features into the game as well, I find it hard to believe that anyone couldn’t enjoy what this game provides. It’s one of my favourites from this developer.

What kind of wonder would it be to see fluffy characters floating through space? Well, now you can, with Fluffy in Space from Eyecon. You’ll get an out-of-this-world experience with Wilds, a Free Spins round and Bonus Feature, too!

Hurray! There is a competition going between users of our site!
You have to do nothing, but browse out site, and win a daily prize. Click here to read more.
You current ranking:
Time Left: 21h 22m 7s