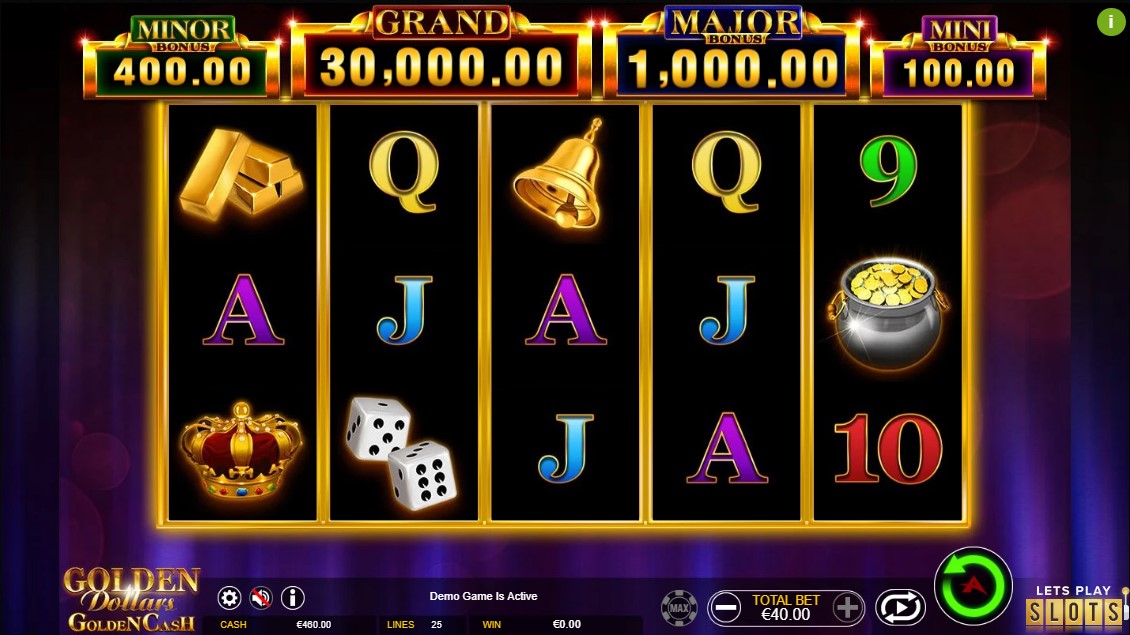 We’d all like to be on the receiving end of some Golden Dollars, right? Well, in this Ainsworth online slot game you could find some Golden Cash coming your way. Wait for the appearance of Scatters, Free Spins and even Progressive Jackpot wins!

Golden Dollars: Golden Cash is a slot game that, I admit, I wasn’t totally enthused about playing when I first saw it and loaded it up. It does veer towards being very generic in terms of its inbuilt symbols and overall gameplay. However, developer Ainsworth also gives it one or two special features to make sure that it has some redeeming qualities. I like the fact that it also incorporates progressive jackpots at the same time, whilst utilising good quality graphics alongside. 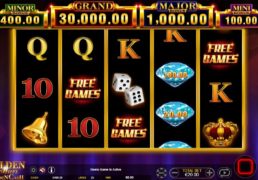 The setup of the game incorporates five reels and three rows altogether. This is, of course, a basic video slot design. Ainsworth has also made sure to include a total of 25 paylines in Golden Dollars: Golden Cash, which isn’t a feature of it that can be customised. On the other hand, you can change the value of the wager that you bring into play with the plus and minus buttons at the bottom of the reels. There, you can choose from bets between €1 and €40 per spin.

The developer has also chosen to use some decent graphics in the creation of this slot game, with appealing enough symbols showing up on its reels. These begin with the playing card additions, from 9 through to 10, J, Q, K and finally A. The latter of these provides you with a €200 pay-out at maximum. There’s also a symbol of some dice, and another of a gold bell. The pile of gold ingots symbols can reward you with up to €240, while the pot of gold has a maximum pay-out of €320. Finally, there’s a crown which can also reward you with up to €320.

A wild symbol comes in the shape of the sparkling dollar sign, which will stand in for all other standard icons upon the reels to help you with forming wins. 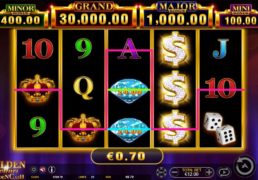 Included on the reels of this slot game is one of my favourite symbols to see – the free spins trigger. This one can show up in any position and still reward you with a pay-out. However, when three or more come into view, you’ll also activate eight free spins in the process. During this feature, you can trigger an additional free spin by the relevant symbol showing up on the reels.

The slot also has something called the Extra Bonus Golden Cash feature. During gameplay, you can trigger this randomly, which provides you with three free re-spins of the reels. A big diamond will show up across reels two, three and four. This counts as nine “diamond” symbols in one contributing towards the Grand Prize jackpot. Should another diamond appear, the diamonds are all held in place and the number of re-spins returns to three.

Six or more diamond symbols at any point in the slot will trigger the standard Golden Cash feature. Again, three re-spins are given with the triggering diamond symbols sticking in place. Each diamond will add an additional random Golden Prize of up to 50x your in-play stake. 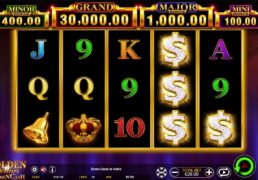 To say that Golden Dollars: Golden Cash has a lot to offer is a bit of an understatement. Then again, for me, it doesn’t really advertise itself as being so compelling when you initially load it up. I appreciate the inclusion of progressive jackpots and mystery feature wins that it has. Free spins are also always great to see, so I’d recommend this one as a bit of a dark horse slot game to access.

We’d all like to be on the receiving end of some Golden Dollars, right? Well, in this Ainsworth online slot game you could find some Golden Cash coming your way. Wait for the appearance of Scatters, Free Spins and even Progressive Jackpot wins!

Hurray! There is a competition going between users of our site!
You have to do nothing, but browse out site, and win a daily prize. Click here to read more.
You current ranking:
Time Left: 23h 25m 59s
Gambling is for 18+ though some countries may have other restrictions...Remember you should always Gamble Responsibly
We use cookies to ensure that we give you the best experience on our website. If you continue to use this site you agree to allow us to use cookies, in accordance with our Terms & Conditions.Agree & Close