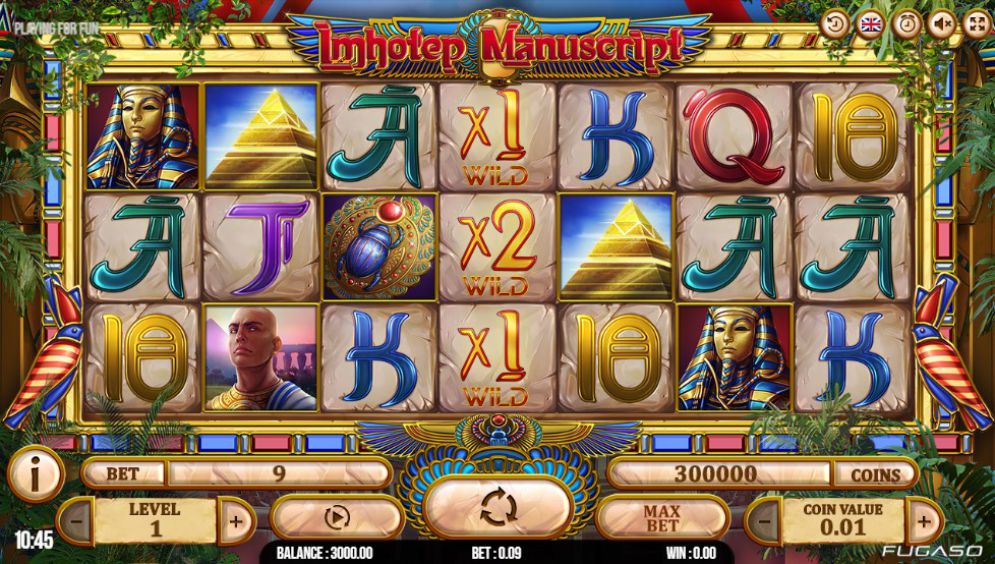 Imhotep Manuscript is an Egyptian-themed slot game by Fugaso that offers innovative game mechanics. The game has 7 reels and 9 paylines that pay both ways, and the central reel consists only of Multiplier Wilds, essentially splitting the game into two 3×3 boards.

The first impression you’ll get when you load the game for the first time is that this must be something amazing, as you got whopping seven reels and very nice graphics that fits the Egyptian theme perfectly. This 7×3 game has 9 paylines so that’s another good sign for the target audience of this slot, as it indicates higher variance, but the paylines pay both ways, which will again make a player happy. Bet per spin can range from €0.09 to €90 and you adjust it by changing the number of coins and the coin value. Autoplay is the best choice for this game, and feel free to increase your bet just a bit as the game has low variance and it won’t be losing your money. 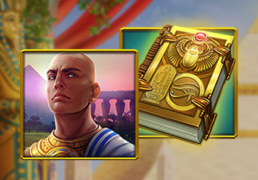 Wilds can land on any reel but Multiplier Wilds appear only on the central reel, and they can have values of x1, which is no multiplier at all, or x2, x3 in the main game. During the free spins game these values rise to x4, x5 or x6. Since the Multiplier Wilds only appear on one reel, there’s no way for them to multiply each other.

The paytable is a bit skinny as it offers prizes up to 60 coins only, at least as far as eight normal symbols are concerned, and if you land seven Wilds you’ll win 100 coins, which is the best non-multiplied prize in the game. Prizes for six-of-a-kind are half of seven-of-a-kind win for that symbol, and then the prizes are halved two more times as you go down to three-of-a-kind. This is nice and predictable, as opposed to some slots that have strange paytables that decrease the wins abruptly.

The free spins game is triggered in the usual way, by landing Scatters, and you’ll get 10, 15, 20 or 25 free spins for three, four, five or six Scatters respectively. During the free spins the middle reel will only show win multipliers of x4, x5 and x6, so you’re likely to land some significant wins during the bonus feature, and we could say the expected average total win from the feature is around 360 coins or 40x your total bet. Since Scatters can land on all seven reels and you only need three, the free spins game is likely to get triggered often, too. 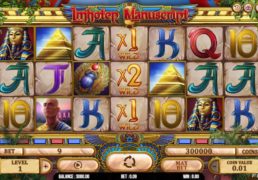 Theoretical return to player (RTP) is, fortunately, 96.00%, so there’s no reason whatsoever not to play this excellent game for real money. While the game isn’t really capable of delivering huge wins that we normally expect from Egyptian-themed slots, it does offer innovative gameplay, good theoretical payout, and win multipliers that can produce single-payline wins of up to 360 coins, which is 40x your bet. The game is capable of keeping your balance hovering around the starting value for a long time as you wait for that big win.

There’s only one thing missing from Imhotep Manuscript and that’s the chance of landing a really big win, but not all slots need to offer that chance. This one is easy and pleasant to play not only because of its graphics but because it pays often and keeps your balance healthy, and although you can’t get a life-changing win – you can’t in any low-variance slot – this is a great choice of a slot game to play for real money. Find an online casino with Fugaso slots and play this one as well as some other exciting titles by this developer. Imhotep Manuscript might just be a perfect low variance game.

Imhotep Manuscript is an Egyptian-themed slot game by Fugaso that offers innovative game mechanics. The game has 7 reels and 9 paylines that pay both ways, and the central reel consists only of Multiplier Wilds, essentially splitting the game into two 3×3 boards.

Hurray! There is a competition going between users of our site!
You have to do nothing, but browse out site, and win a daily prize. Click here to read more.
You current ranking:
Time Left: 11h 3m 32s
Gambling is for 18+ though some countries may have other restrictions...Remember you should always Gamble Responsibly
We use cookies to ensure that we give you the best experience on our website. If you continue to use this site you agree to allow us to use cookies, in accordance with our Terms & Conditions.Agree & Close