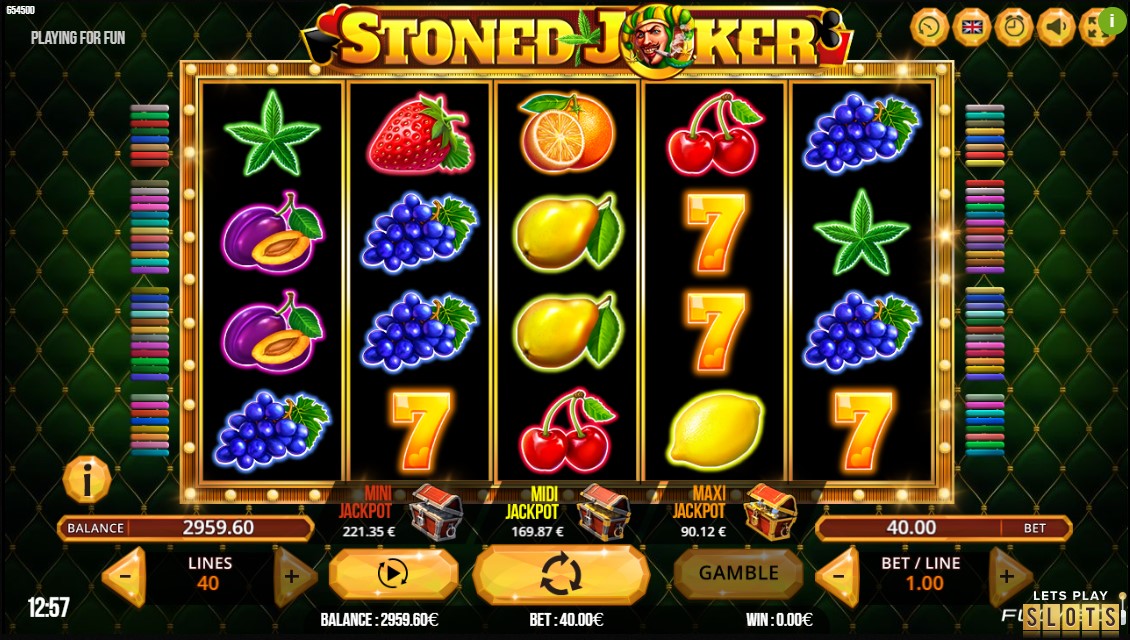 I bet you never expected to see a joker getting stoned in an online slot game, did you? Well, Stoned Joker brings that theme to life from the get-go.

Far be it for me to promote smoking marijuana, but when it comes in the form of a Fugaso slot, there’s little more that I can do. Stoned Joker brings the effects of smoking weed to the forefront of its theme, and it does that with Fugaso’s usual brand of high-quality graphics. As it happens, the game uses pretty standard imagery throughout, save for the wild and scatters that are more-specific to this theme. 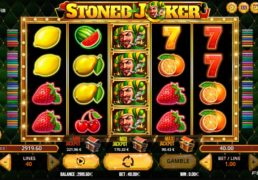 With a set of five reels and four rows, Stoned Joker’s layout is slightly larger than the average video slot interface. Across this design, Fugaso has chosen to add a total of 40 paylines to bet on, which you can customise easily with the buttons at the bottom of the reels. You’ll also have the opportunity to change your bet there, too. Coin values between €0.01 and €1 can be chosen from, providing you with a maximum bet amount of €40 per spin in the slot.

Stoned Joker also takes most of its symbols from traditional slot games, meaning that the majority of them centre on fruits. The cherries, lemon, plum and orange are all able to provide you with a maximum pay-out of €100. At the same time, the bunch of grapes and the watermelon can reward you with up to €160 altogether. There’s also the inclusion of a pear and a strawberry icon, both of which have maximum pay-outs of €240. The best standard symbols are the red and yellow number 7s though. Both of these offer up rewards of up to €400. 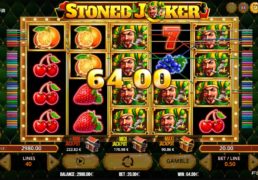 This slot does include a couple of bonus features, which start with the addition of a wild icon. This is the weed-smoking joker, who can appear on any of the five reels. If he does, he will substitute for all other standard icons, helping you create winning combinations in the process. Five of this one on a winning payline will reward you with up to €2,000 as a pay-out.

To add to this, Stoned Joker also has its own scatter symbol. This comes in the form of the hemp leaf. Scatters can appear in any location and still reward you with a pay-out.

Finally, this game does include a set of progressive jackpots for you to try and win as well. They can be seen increasing at the bottom of the reels all the time. You need to watch out for the appearance of the treasure chest icon in the corresponding colour, which will reward you with the relevant jackpot pay-out. 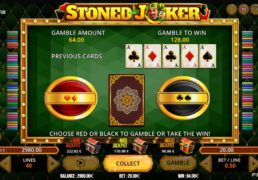 Considering that I’m not really such a huge fan of games that incorporate traditional slot machine symbols, Stoned Joker actually entertained me. Fugaso has made sure to include effective graphics in the game and the progressive jackpots also make it more appealing.

I bet you never expected to see a joker getting stoned in an online slot game, did you? Well, Stoned Joker brings that theme to life from the get-go.

Hurray! There is a competition going between users of our site!
You have to do nothing, but browse out site, and win a daily prize. Click here to read more.
You current ranking:
Time Left: 12h 41m 29s
Gambling is for 18+ though some countries may have other restrictions...Remember you should always Gamble Responsibly
We use cookies to ensure that we give you the best experience on our website. If you continue to use this site you agree to allow us to use cookies, in accordance with our Terms & Conditions.Agree & Close