Give the salute to Miss Major, because she’s the one who’s going to lead you through this war and see that you survive it. This Casino Technology slot offering features great graphics, a compelling theme, with Free Spins, a Wild symbol and more in play.

The army is rolling into town in this Casino Technology slot – and its troops are ordered by the one and only Miss Major. She’s dishing out the commands to the soldiers, and they’ll be expected to obey her. At least, that’s the back story that I decided to come up with for this online slot. It seems to fit well with the overall design and graphics that are on display. Miss Major is actually quite a nice slot game to play, featuring one or two special perks for you to enjoy. 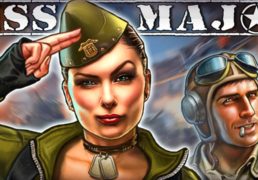 The main game of Miss Major is made up of a five reel and three row layout, so everything looks very standard with its setup. This is joined by a total of 30 pay lines to wager on, which have been set in place. Bets can be changed easily by using the relevant button at the bottom of the reels, so the design of Miss Major is pretty ergonomic.

I like the fact that the graphics in the game are of such high-quality, too. It’s imbued with the khakis and greens that you’d associated with the military. The lower-paying symbols on the reels are the standard playing card additions of A, K, Q and J, while the higher-paying ones are much more thematic. This means that you’ll see the inclusion of a vintage aircraft, a navy warship, a steam train a tank and others.

While you’re playing this game, you may see the arrival of the wild symbol. This can show up on reels two, three and four only, and is present in the shape of Miss Major herself. If she does appear, she will substitute for all other standard symbols, assisting you with forming wins.

There’s also a scatter icon, which is designed in the shape of a badge of honour. If three or more of these come into view, then you will activate the 10 freespins round. During this feature, the wild symbol will expand if it appears, and thereby cover the reel it is on. If this does happen, it will remain locked in position for the remainder of the freespins round.

Finally, if you manage to cover the entirety of the three middle reels with the Miss Major wild, you will activate the jackpot round. From this, you have the possibility of winning either the Grand or Major progressive jackpot!

You don’t need to be an army buff to play the Miss Major slot from Casino Technologies, but it may make you want to enlist afterwards! In all seriousness, I had a lot of fun spinning the reels of this new slot. And with the freespins round as well as the potential to win a progressive jackpot, it really sits atop the Casino Technologies collection of slots.

Give the salute to Miss Major, because she’s the one who’s going to lead you through this war and see that you survive it. This Casino Technology slot offering features great graphics, a compelling theme, with Free Spins, a Wild symbol and more in play.

Hurray! There is a competition going between users of our site!
You have to do nothing, but browse out site, and win a daily prize. Click here to read more.
You current ranking:
Time Left: 15h 22m 6s