These little monkeys have been aping around in the jungle and have made off with all of the money. It’s up to you to spin the reels of Monkey Money by Boongo to try and get it all back. Watch out for its special bonus round and quirky imagery on the reels. 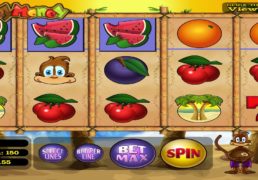 I can’t say what I was expecting from the Monkey Money slot game when I saw its title, other than the fact that it would feature primates. Well, my guess on that was correct, although this Boongo slot doesn’t really have much more than that to offer up. The graphics within are fairly standard, although when compared to many other developers’ games, they’re a lot lower in quality. It’s also got a single additional special feature round that you can trigger, but more about that later. 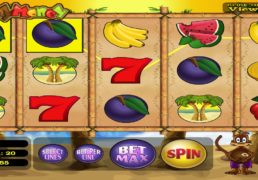 This slot does have a five reel and three row layout on display, which made it seem like it could incorporate so many more perks than it actually does. Across this layout, you have the ability to place bets on nine pay lines. You can customise how many of these are active at any time though, just by using the “Select Lines” button. Additionally, you can change you bet by selecting a coin between €0.01 and €1 and then altering the bet per line between one and five. This means that a maximum overall wager of €45 per spin is possible.

Visually, the game takes place against a tropical backdrop, although the symbols on the reels are relatively close to those from a traditional slot game. The cherries and the plum symbols come first, both of which are able to provide pay-outs from the appearance of two on a win line. Then comes the red number 7, followed by the watermelon and the orange. The bunch of bananas comes next as a symbol, which can pay out up to €5,000. Then there’s the coconut trees, the monkey and the gold coin symbols, the latter of which can reward you with up to €25,000 as a win. 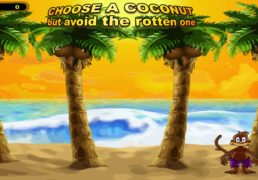 I was quite surprised to find that there is just a single bonus feature in this game. There isn’t a wild symbol, nor is there a scatter. Instead, if the symbol of a coconut shows up on the reels, it will be collected by the monkey stood at the bottom of the screen. Once he collects three, the bonus round begins.

In the bonus round, you are presented with several coconut trees and you have to click on them for the monkey to pick them off and throw them down to reveal wins. The round ends once you pick a rotten coconut.

For me, there’s so much more that could have been done with this slot. Boongo could have done with at least adding a wild symbol or even a freespins round to boost it up a bit more. The lower-quality of graphics don’t really help it either. It’s a decent game, although it didn’t keep me entertained for a long period of time.

These little monkeys have been aping around in the jungle and have made off with all of the money. It’s up to you to spin the reels of Monkey Money by Boongo to try and get it all back. Watch out for its special bonus round and quirky imagery on the reels.

Hurray! There is a competition going between users of our site!
You have to do nothing, but browse out site, and win a daily prize. Click here to read more.
You current ranking:
Time Left: 13h 46m 12s